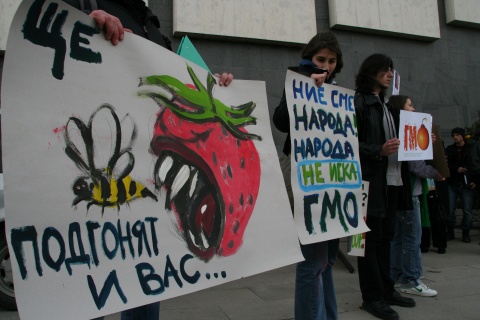 Waves of protests in Bulgaria forced Parliament to ban the cultivation of GM crops in the country in March 2010. Photo by BGNES

Genetically modified animal feed without GMO labeling is being sold on the Bulgarian market, according to reports of the Public Environmental Center for Sustainable Development/ PECSD/ in Varna and environmental NGO 'Za Zemiata' (For the Earth).

A team of experts conducted the testing in November with the financial assistance of the European Union.

The tests were performed using the "Real Time PCR" method for DNA analysis, which is considered as the most reliable nowadays.

The representatives of the two environmental organizations explained that, under Bulgarian and European legislation, the products should have been labeled due to the high content of genetically modified ingredients.

Ivaylo Popov from Za Zemyata explained that the results of the tests would be sent to the Ministry of Agriculture and Food.

The environmentalists said that the test results would be officially recognized because they had not been conducted by a state body, despite the fact that they were obtained at a licnesed laboratory.

They suggested that a portion of the revenues collected from such penalties should remain with the supervisory bodies because no money had been so far earmarked for feed testing.

In the meantime, Bulgaria's Agriculture Ministry issued a letter, saying that GMO feed was being imported from third countries via Romania and was sold freely on the Bulgarian market.

In February, Bulgaria became the seventh EU country to impose a safeguard clause against MON810 maize.

Even though MON 810 was approved for use by the EU in 1998, six countries - Austria, Hungary, Greece, France, Luxembourg, and Germany have banned it by taking advantage of safeguard clauses.

In March 2010, Bulgaria's Parliament banned the cultivation of genetically modified crops in the country by conclusively adopting amendments to the Genetically Modified Organisms Act.