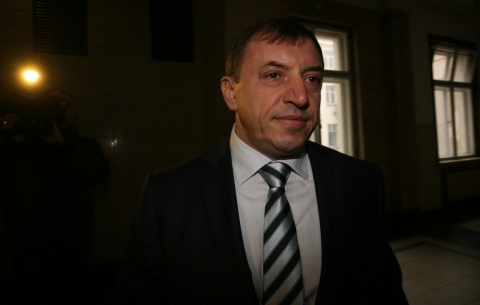 Aleksei Petrov, who is allegedly one of Bulgaria's top mafia bosses. Photo by BGNES

Aleksei Petrov, who is allegedly one of Bulgaria's top crime bosses, has come out with sarcastic comments regarding the high-profile that was launched against him on Monday, "Octopus".

"I consider announcing a contest for a director who can make a movie based upon the events that have been described in the indictment," Petrov has said, as cited by the BGNES news agency.

"(Interior) Minister Tsvetan Tsvetanov and Prosecutor Svetlozar Kostov have shown a considerable deal of imagination creating events in which I have not taken part and which I believe have not happened at all," the alleged mafia boss has stated, adding that he believes some of the events described in the indictment are "impossible".

According to Petrov, it is those who are accusing him who constitute the real "Octopus". He expressed his hope that it would become clear "who robbed Bulgaria" when the trial ends.

The indictment against former employee of the State Agency for National Security, DANS, murky businessman and alleged crime boss Alexey Petrov was filed by the prosecution following an investigation of close to two years.

Petrov, together with five other people, including former prosecutor Tseko Yordanov, Marchelo Dzhotolov and Anton Petrov - aka "Hamstera" (i.e. "The Hamster") are facing charges of racketeering and extortion.

Petrov was arrested on February 10 2010, in a special operation codenamed "Octopus".

The Interior Ministry said at the time that it had bust a very powerful, exceptionally well organized and hierarchically structured crime ring that had been functioning since 1997.