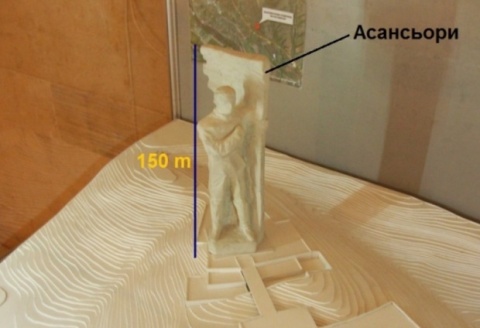 A model of the planned 150-meter-high statue of Bulgarian national hero Vasil Levski has been unveiled. Photo by 7plus7.net

A Bulgarian NGO and a municipality are coming together to erect 150-meter-high statue of Bulgarian national revolutionary hero Vasil Levski to be located near the border with Turkey.

The new Levski monument is a project of an NGO called "I Love Bulgaria", and was first presented to the public in July 2011; the local authorities in the southern Bulgarian town of Svilengrad, which is located near the borders with Turkey and Greece, have now unveiled a model of the record high statue.

Bulgaria's national hero and revolutionary Vasil Levski (1837-1873) was the most important Bulgarian freedom-fighter against the Ottoman Turkish Empire; on top of his great organizational skills and courage, he is also known for his strong democratic views and calls for setting up a "pure and holy republic."

Levski was hanged in Sofia by the Ottoman authorities in 1873, five years before Bulgaria's national liberation.

According to the "I Love Bulgaria" NGO, however, the idea of the monument has nothing to do with any provocations towards the Republic of Turkey, which is considered the historical heir of the Ottoman Empire that Levski fought so vehemently.

Their rationale is to locate the Levski statue along the route of the E 80 road (corresponding to Pan-European Transport Corridor No. 10 – running from Istanbul to Central Europe) in order to greet those traveling the great route linking Europe and Asia.

The authors of the Levski monument idea have pointed out that they want to live true to his vision, summarized in his famous quote:

"I dream of a pure and holy republic in which Bulgarians, Turks, Armenians, Greeks... will live equal before the law."

According to the organizers the future Vasil Levski monument near Svilengrad will have the potential to overshadow the Jesus Christ Statue in Rio de Janeiro and the statue of the Virgin Mary near Bulgaria's Haskovo.

The Levski monument is supposed to be unique with two panoramic elevators located inside the flag post that the hero will hold, that will provide a magnificent view from a height of 150 m. The inside of the monument will also feature an interactive museum depicting Vasil Levski's struggle for Bulgaria's National Liberation from the Ottoman Empire, an exhibit, and a restaurant.