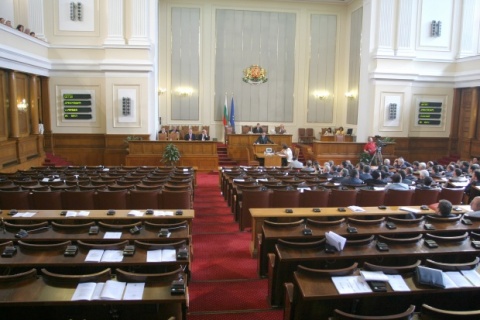 Bulgaria's budget deficit is supposed to be no more than 1.35% of the GDP in 2012. Photo by Sofia Photo Agency

Bulgaria’s Parliament has adopted at second reading the framework for the 2012 state budget within the debates on the 2012 State Budget Act late Thursday night.

Thus, the MPs sealed the key figures in Bulgaria's draft budget for 2012, as defended by Minister of Finance Simeon Djankov, including a budget deficit of 1.35% of GDP, or about BGN 1.5 B, next year.

The adopted 2012 Bulgarian state budget framework also provides for an economic growth of 2.9% that even Djankov himself admitted is too optimistic, and an annual inflation rate of 2%.

BGN 2 B out of Bulgaria's BGN 4.5 B fiscal reserve can be spent in 2012, according to the budget provisions.

Earlier, the MPs approved the proposal to up Bulgaria’s minimum retirement pension from BGN 136 to BGN 145 monthly as of the spring of 2012, and to increase the retirement age by four months, starting on January 1, 2012.

The ruling majority of the center-right GERB party defeated any proposals of the opposition Socialists for increasing the projected state income for 2012, and for cracking down on cigarette contraband to raise more revenue.

The framework for the draft budget for 2012 was announced by the Borisov cabinet just after the first round of presidential and municipal elections in Bulgaria October 23.

Prior to that, the Bulgarian government had agreed with trade unions not to up the retirement age before 2021, and had signed an agreement with representatives of farmers regarding much larger subsidies than those stipulated in the draft budget 2012.