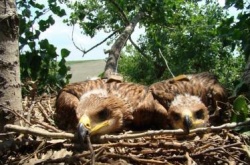 Bulgarian police in the southern Black Sea city of Burgas have detained a British citizen, accusing him of the peculiar crime of collecting the eggs of rare birds.

Collecting such eggs is a crime under Bulgarian and European law, as it is an activity that can lead to significant damage to populations of endangered species.

The unnamed  UK citizen, a resident of Burgas has been detained during a special operation of the local police, who had followed his activities for some time.

Upon conducting a search of his flat, police officers found a number of eggs of bird species protected in Bulgaria and other European countries, including vultures.

The undisclosed number of eggs uncovered suggests that the person has participated in or sponsored massive plundering from birds' nests, which manifestly threatens their reproduction.

Further investigations are under way to fully document the activities of the British citizen.