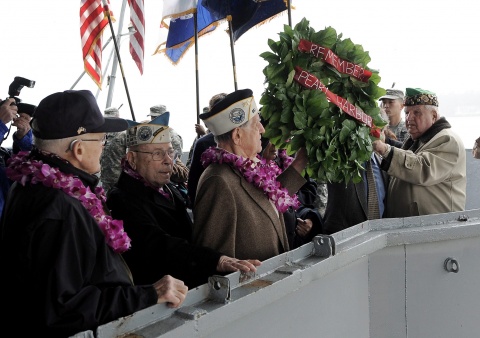 Pearl Harbor survivors throw a wreath into the river during a ceremony on the `USS Intrepid` Sea, Air, and Space Museum to commemorate the 70th anniversary of the attack on Pearl Harbor, in New York, New York, USA, 07 December 2011. EPA/BGNES

The USA has remembered Wednesday the surprise attack by Japan on its Pearl Harbor base in Hawaii that brought America into World War II, and opened the fighting between the Axis and the Anti-Hitlerist Coalition in the Pacific theater.

Every year on Dec. 7 the nation pauses to remember the 2,400 US personnel who died that day, and the generation of ordinary citizens which picked up Pearl Harbor's fallen flag and fought to victory in World War II.

"We look to December 7, 1941, to draw strength set by the example of these patriots and to honor all who have sacrificed for our freedom," said President Obama in his proclamation for Pearl Harbor Remembrance Day 2011.

"We salute the veterans and survivors of Pearl Harbor who inspire us still.  Despite overwhelming odds, they fought back heroically, inspiring our nation and putting us on the path to victory.  They are members of that Greatest Generation who overcame the Depression, crossed oceans and stormed the beaches to defeat fascism, and turned adversaries into our closest allies," he added.

"On this National Pearl Harbor Remembrance Day, we also reaffirm our commitment to carrying on their work—to keeping the country we love strong, free and prosperous," said Obama.

Survivors of the surprise Japanese attack on Pearl Harbor will remembered the 2,400 people who lost their lives 70 years ago Wednesday.

About 3 000 guests witnessed a rifle salute, wreath presentations and recognition of those who died, according to the National Park Service, which operates the World War II Valor in the Pacific National Monument.

The Pearl Harbor Survivors Association, founded in 1958, is dissolving December 31. The passing of time, the difficulty in finding chapter officers and the health of its 2,700 members have taken their toll, the NYT reported.

"We had no choice," said William H. Eckel, 89, who was once the director of the Fourth Division of the survivors' association, interviewed by telephone from Texas. "Wives and family members have been trying to keep it operating, but they just can't do it. People are winding up in nursing homes and intensive care places."