Bulgaria, Romania to Watch Out for Black Sea Tsunamis 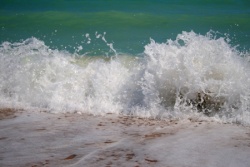 Bulgarian and Romanian scientists will take part in establishing an early alert system for geological hazards on the two countries' Black Sea coast.

The project is financed by EU's cross-border cooperation program and is its total cost is approximately EUR 6 M, which makes it one of the largest scientific projects currently developed in Bulgaria.

The project is extremely important for the security of the Bulgarian and Romanian citizens who live near the sea cost, as well as the two countries' tourism sector, Associate Professor Orlin Dimitrov from the Bulgarian Oceanology Institute has pointed out.

A total of 10 stations will be placed on Bulgaria and Romania's Black Sea aquatory as a part of the project.

"The stations will observe seafloor vibrations – vibrations which will show whether earthquakes are about to take place and whether the earthquakes can cause tsunami waves," Dimitrov has explained, as cited by the Btv private channel.

According to experts, tsunami waves can threaten Bulgaria and Romania's Black Sea coast if a strong earthquake occurs.