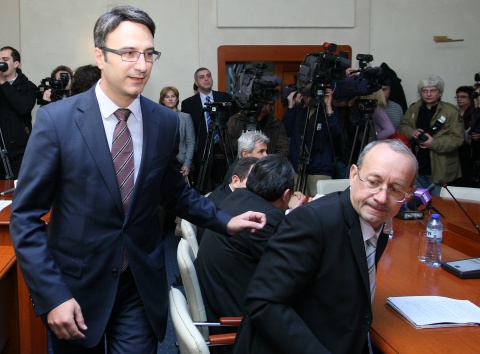 Czech firm CEZ and Austrian firm EVN have no intention of selling their majority shares in the Bulgarian power utilities that they own, according to Bulgarian Economy and Energy Minister Traicho Traikov.

Traikov's comment came Monday, after on Saturday German company E.ON sold its 66% share of E.ON Bulgaria (the rest is owned by the Bulgarian state) for EUR 133 M to private Czech company Energy Pro.

Speaking on Monday, the Economy Minister said the deal will fall through if the Bulgarian energy watchdog, the State Commission for Energy and Water Regulation (DKEVR), does not issue a license to the new owner.

He noted that the sale of E.ON Bulgaria to Energy Pro is a good reason to consider a change in Bulgarian legislation that would allow the minister to approve such deals when it comes to assets of crucial importance to the nation.

“The sale was fully managed by the E.ON headquarters in Duesseldorf. We knew unofficially how it was going, including the fact that the EBRD first sold its shares to E.ON, and then E.On sold the entire package to Energy Pro,” Bulgaria's Economy Minister told reporters in Sofia after meeting with Vera Kobalia , Minister of Economy and Sustainable Development of the Republic of Georgia, as cited by BNR.

“By the way, I used this meeting to ask the Georgian minister about their impressions from the work of Energy Pro because they are in charge of the power utilities in Georgia,” Traikov explained.

“In her words, Energy Pro has good reputation and is fulfilling its commitments in Georgia so we expect to see the same in Bulgaria. But regardless of the company in question, it is still in the competence of the State Commission for Energy and Water Regulation [regarding a license] and there is no way to make compromises with the servicing of the clients,” he added.

Bulgaria's electricity distribution is geographically divided among three utilities - EVN in the southeast, E.ON - in the northeast, and CEZ in the west.

E.ON Bulgaria operates an electric power network spanning 42,000 km and delivering 5.3 B kWh of electricity during 2010.

E.ON plans to shed assets worth EUR 15 B by the end of 2013, whereas up to this point it has sold units for EUR 9 B, according to a company statement.

At end of November, news reports had it that Russian state-owned Holding MRSK OAO is also interested in acquiring E.ON Bulgaria.

The Bulgarian press has commented that the E.ON withdrawal is motivated both by a new global strategy of the company to move away from Europe on to Russia and Latin America, and by what the company sees as excessive interference on the part of the Bulgarian government.