ICANN CEO and President Rod Beckstrom: It's Great Bulgaria Cares So Much about Cyrillic Domains 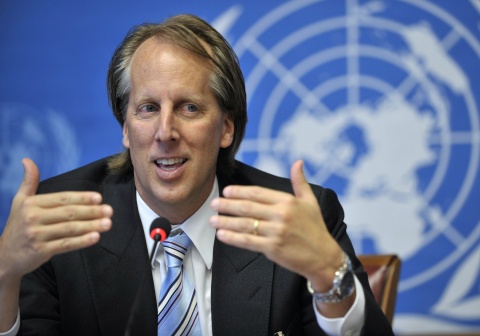 Interview of Novinite.com (Sofia News Agency) and Novinite.bg with Rod Beckstrom, President and CEO of ICANN, author and high-tech entrepreneur.

Beckstrom previously served as Director of the US National Cyber Security Center. Prior to that Beckstrom was Chairman and Chief Catalyst of TWIKI.NET, a company which supports TWiki, an open source wiki. He is co-author of the best-selling book The Starfish And the Spider.

Beckstrom was in Bulgaria in November 2011, his first ever visit in the capacity of ICANN chief, for meetings with the Bulgarian government and Internet community.

Has this been your first visit in Bulgaria? What were your activities in Sofia?

This is my second time in Bulgaria actually. Last time I was in Sofia was 27 years ago – 1984. Incredible contrast!

It's great to see the remarkable progress that Bulgaria has made! Sofia is a very different city now from what it was.

It's really wonderful to be back, and an honor to meet President Georgi Parvanov and the Deputy Minister of Transport, IT and Communications Valeri Borisov, and other leaders.

We were in Bulgaria to communicate about the new generic Top Level Domain (gTLD) program – about the opening up of the right of dot on the Internet, and also to enhance our relations with the Bulgarian Internet community, government leadership, civil society, and companies.

We've been able to do all of that in 24 hours, which has been great thanks to the good contacts of our representative for the country Veni Markovski.

The Bulgarians are still trying to get approval for badly desired Bulgarian Cyrillic Internet domain - .бг , even though it was rejected for looking too similar to Brazil's .br. From you point of view – how does this Bulgarian aspiration seem – that is, to get this particular domain name? Is it irrational? Would you advise the Bulgarians to go for something else?

I would advise the Bulgarians to go for something else. The initial application for .бг was unsuccessful.

The job of ICANN, the organization, is to implement the policies that are developed by the global communities. Those communities did not allow the initial application to go through because of potential visual confusion. So I think the Bulgarians can go back and they can choose what they want to apply for.

The Bulgarians can apply for a three-character name, they can apply for .българия in Cyrillic, it's really up to the local community.

It's great to see how much the local community cares; the Bulgarian government has been involved in our policy-making and what we call the Government Advisory Committee but we are hoping that even more people from Bulgaria – users and companies – will get involved in ICANN to help shape the policies in the future that they want to see.

Deputy Minister Valeri Borisov said Bulgaria can go for the long procedure  - whatever that really means. What are Bulgaria's chances of getting .бг?

There is going to be a round-table discussion in Sofia on January 4, 2012, where the community will get together, perhaps with the Deputy Minister, and they can explore all different options.

There are at least three different options. One is to wait for the policies to change and to participate in changing policies, and to apply again.

The second possibility is to come up with another string (i.e. domain name extensions – editor's note) – whether it's three characters, or .българия in full or something - that's the second choice.

The third choice is to abandon the concept and move on to other ideas – some new gTLD, for example. So it's really up to the community in Bulgaria to make those decisions.

What we at ICANN will do is we will administer any process that's been approved by the Board professionally and fairly. And, by the way, Bulgaria was not the only applicant who had their string turned down because of visual confusion. There were others as well.

Have the others been better at coping with this issue?

With many applicants there was no problem because there wasn't any confusion. For example, with the United Arab Emirates – it's a long name of Arabic characters, and there is no confusion with anything.

They passed that test successfully. So 30 different IDNs (i.e. internationalized domain names – editor's note) are already in the Internet.

There's been talk about domain names such as .софия, .пловдив in Cyrillic. Would you say these would be of any use? What would be their benefits from your point of view?

It's not for ICANN to judge the benefits, it's our job to open up the Internet domain name system to innovation. So if there is a good and qualified application that can make it through all the rules, then, yes, it would be possible to create something like .софия. But it's up to the applicant to the decide whether they think that makes sense for users here, and whether they have a business model that can work.

Since you mentioned the IDNs – how is the process for their adoption going? The past 20 years things were pretty straightforward – globalization - Internet - the English language - the Latin alphabet. How are the IDNs going to change the Internet in the wider context?

I think it's just important to people of the world that they have the opportunity to create domain names totally in their local script. So it's very popular – both in concept and in utilization – and we are really pleased now to see Chinese, Arabic, and so many other characters.

We just approved seven different scripts for India because they have so many languages there. It's a very much appreciated program.

We understand people in Bulgaria are disappointed. We are disappointed, too. But we have to enforce the rules of the Internet for stability and security that are developed by the global community.

From your point of view – with the advent of Web 3.0, the so called semantic web – what is the Internet going to look like in 5 or 10 years?

Ten years ago I didn't see Facebook coming, I didn't see Twitter coming. I think what we're going to have is more surprises and more innovations. I hope we see some exciting new products and services coming out of Bulgaria.

I have a new application on my phone that's one of my favorite apps. It came from Lebanon. It's a 360-degree panoramic photo tool. So there is innovation coming from all over the world. I think that will be one of the trends in the next 10 years.

You are one of the top experts on cyber security. There is this constant talks about how bid a deal cyber security is. But at the same time there haven't been really apocalyptic events caused by breaches of cyber security – no wars have been started, for example.

There have been big losses in Europe when carbon credit was stolen. I think it was worth EUR 30 M. That's a real crime.

But that's not like starting a war, and the other day we didn't see Facebook being taken down by the Anonymous hackers. So how much of an issue is that going to be?

My one prediction is that cyber security problems are not going to go away. And I do think it is a different level because there is more than just finances at stake. There are more industrial, power, and finances systems, and more dams and factories that get completely networked.

The vulnerabilities are increasing so I think it is an issue for all of us to work on, and the only answer is better international collaboration.

We were pleased to see yesterday at the Domain Forum that that some of the Bulgarian law enforcement came; for example, Yavor Kolev was there. They are very active and working with partners around the world, and are very respected.

What are some ways in which the Bulgarian Internet community and public can get involved with ICANN?

That is a great question. Please join our community. Any user who has Internet access can join the Internet Society chapter in Bulgaria that is active in the ICANN community. It's part of what we call "at large." They have a voice in policy making.

Also, we have three big public meetings every year. We just met in Senegal. Our next meeting is in Costa Rica but the one after that is near Bulgaria, it's in Prague. In June 2012, we have our public meeting there. We will probably have 1 500 people from around the world. It's free. Anyone from Bulgaria or elsewhere who wants to go and raise their voice, can go to Prague, and join us. We would love to have them.

The Bulgarian government and country code operators will already be there, some members of the Internet Society will be there.

There is a program – ICANN Fellow – and its very close. That's the time for Bulgarians to apply for fellowships from ICANN.

And if you don't want to go to Prague or Costa Rica, you can always participate in our programs online because we are open. People can post their questions and comments right online during the discussions.

ICANN is uniquely open. Any person on the planet can come to an ICANN meeting, walk up to a microphone, and share their opinions on Internet policies.