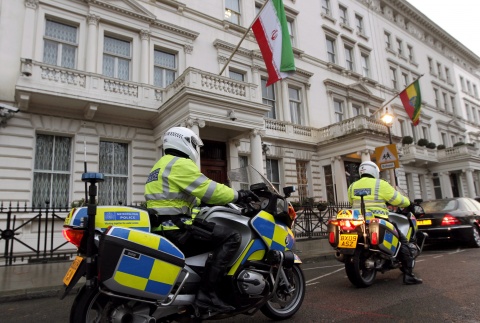 The United Kingdom has expelled all Iranian diplomats from its territory after the British Embassy in Tehran was stormed by a crowd, British Foreign Secretary William Hague announced on Wednesday.

The British Embassy in Tehran was assaulted by university students during an anti-British protest rally in a reminiscence of the 1979 capture of the US Embassy in the Iranian capital after the Islamic Revolution.

Hague told the British Parliament Wednesday that the Foreign Office demanded "the immediate closure of Iranian Embassy in London."

"Staff must leave within the next 48 hours. If any country makes it impossible for us to operate on their soil they cannot expect to have a functioning embassy here," he stated, as cited by RIA Novosti.

"It is not possible to maintain an embassy under these circumstance and these threats and actions," Hague told members of parliament.

Iranian protesters stormed the British Embassy in Tehran on Tuesday after rallying against sanctions the UK imposed on Iran earlier this month.

The crowd, mostly students, attacked the embassy compound, tore down the Union Jack and replaced it with Iran's flag. They also ransacked offices in the compound, throwing stones and Molotov cocktails at embassy buildings, which caused a fire in one of them.

The attack was part of a larger demonstration that followed a decision by the Iranian authorities to expel the British ambassador from the country within 15 days.