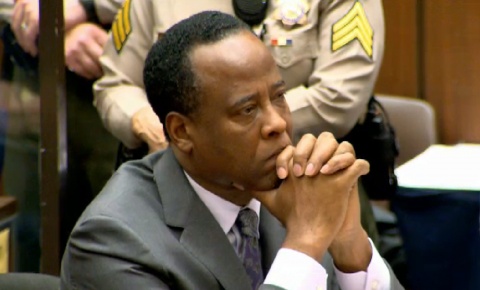 Dr. Conrad Murray listens as Judge Michael Pastor sentences him to four years in county jail for his involuntary manslaughter conviction of pop star Michael Jackson in this screen grab from pool video, at the Los Angeles Superior Courthouse in Los Angeles

Pop star Michael Jackson's doctor Conrad Murray has been sentenced to four years in jail for involuntary manslaughter of his client Tuesday in California.

Murray's trial kicked off in September over worries that the doctor might have provided incompetent treatment to his patient, which has resulted in his 2009 death.

Jackson's parents and siblings Jermaine, LaToya and Randy were present at today's sentencing, but did not speak, instead allowing family friend and attorney Brian Panish to read a statement on behalf of the Jackson's three children and family, which said they are not seeking revenge.

According to the prosecution Murray knew he was doing harm to Michael Jackson by administering powerful sedative propofol to him, but nevertheless went on, exploiting the drug's addictive effects.

Murray was convicted of involuntary manslaughter earlier this month, after it was proved Jackson's death resulted from an overdose of propofol, but the defense argued for probation, citing his immaculate record as a physician.

In the end, Tuesday Los Angeles Judge Michael Pastor decided on the maximum sentence for the case, four years in prison.