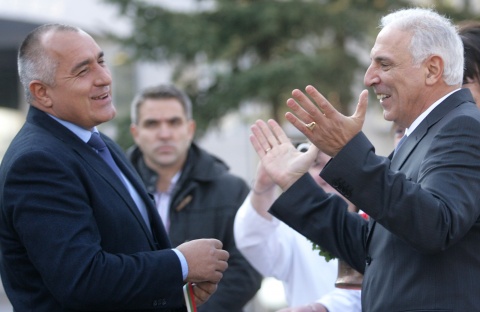 Bulgarian PM Boyko Borisov (L) was present Tuesday at the inauguration of repaired sections of the St. Anna hospital in Sofia. Photo by BGNES

Bulgarian PM Boyko Borisov has suggested that the debt crisis will provoke a division within the EU between financially disciplined member states and underdogs, and that Bulgaria will be in the first group.

Tuesday Borisov was asked by journalists to comment on a statement by Bulgarian Minister of Finance Simeon Djankov, who said that the eurozone could fall apart in the near future.

"Member states that have low debt and deficit less than 3% need to be stimulated and rewarded. The rest need to be penalized like bad pupils. Then you'll see that the EU is completely stable," quipped the Bulgarian PM.

"I am convinced that in the next months there will be a strong stirring, a reconfiguration within the EU. And Bulgaria is completely ready to be part of the top tier of good pupils," continued Borisov.

The Bulgarian PM and his vice-PM, FinMin Simeon Djankov, have continually defended the cabinet policy of austerity and spending cuts as providing a shield for Bulgaria from the hits of the financial crisis that has engulfed many European Union members.