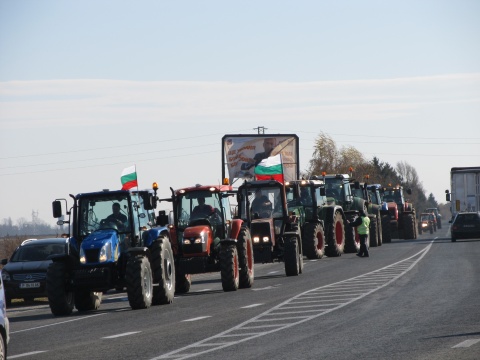 Farming machines on their way to a protest held Tuesday near the Bulgarian crossing point to Romania near Ruse. Photo by BGNES

Protesting Bulgarian farmers from the north-east plan to stage a symbolic 20-minute blockade of the Danube Bridge between Bulgaria and Romania at the city of Ruse Wednesday.

Nationwide protests of Bulgarian agriculture producers were unleashed Monday following disagreements with the government on the level and timeline of payment of subsidies.

Tuesday the Bulgarian National Radio reported that hundreds of farming machines have been parked on the road to the main crossing point to Turkey, Kapitan Andreevo.

Later during the day farmers from Bulgaria's north-east, mounted on some 200 farming tractors, held a protest nearby the Ruse Danube Bridge.

Farmers have stated that they do not intend to impose full-scale blockades of checkpoints to neighboring countries, in order not to disrupt the lives of fellow citizens.

But they have vowed they will persist in their protests and will stage short-term road blockades at key points to attract attention to their grievances.

Representatives of protesting farmers have said that before end of October presidential and municipal elections in Bulgaria, they had signed an agreement with Minister of Agriculture Miroslav Naydenov and Minister of Finance Simeon Djankov regarding the range and payment of subsidies.

They also claim that notwithstanding that fact, the draft state budget for 2012 tabled after the elections includes much lower subsidies, and have accused the cabinet and FinMin Djankov in particular for discarding their own word.

On his part, Minister of Finance Djankov has contributed to the tension, by saying that should farmers go out in protest, their subsidies will be cut even further.

Each year Bulgarian farmers receive an EU subsidy, which is determined by the size of their land. The amount slated for 2012 is over BGN 830 M. There are also BGN 110 M in the state budget for grain producers, BGN 71 M for animal keepers and BGN 73 M for tobacco growers.

Grain producers, however, demand another BGN 230 M in the national treasury. The discontent escalated after the passing in the Parliament, at first reading, the draft 2012 budget, where the amount was lower than what was promised by these BGN 230 M. A month before elections, the cabinet and the farming associations signed a financial frame, which included BGN 570 M for the farming sector.

The Chair of the National Association of Grain Producers, Radoslav Hristov, says the protest is not political, and farmers are simply protecting their interests.

A nationwide protest is also called in capital Sofia Wednesday by trade unions, due to social benefit cuts proposed by cabinet for next year. Farmers are expected to join in too.