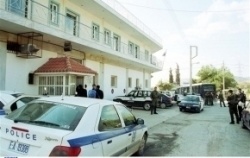 File photo of the Haidari police department by GRReporter

The body of 60-year-old Rosen Hristov, chairman of the Bulgarian community in Athens, has been discovered in the Athens suburb of Haidari.

According to GRReporter, wounds from sharp objects have been found on the head and leg of the victim during the autopsy.

The police are searching for a Bulgarian woman who was living with Hristov and reportedly left the house a couple of days ago.