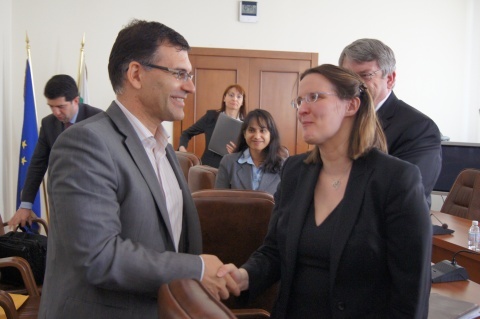 A mission of the International Monetary Fund will visit Bulgaria's capital Sofia during the period December 1-8, 2011 to hold regular bilateral discussions on economic policies with the Bulgarian authorities, the fund announced.

The mission will be headed by Mrs. Catriona Purfield.

"The mission will meet with officials from the Ministry of Finance, the Bulgarian National Bank, other government agencies, as well as representatives from the private sector, including banks and industry, unions, and non-government organizations," IMF's Regional Resident Representative in Bulgaria and Romania, Tonny Lybek, said.

The mission will disseminate its conclusions at the end of the mission.

The International Monetary Fund warned last month that Eastern Europe risks to be dealt a heavy blow as contagion from the euro zone debt crisis spreads.

It has downgraded its forecast for the 2011 growth of the Bulgarian economy to 2.5% from a projected 3% estimate made at the beginning of the year.

The IMF also reduced its estimate for inflation in Bulgaria from 5% to 3.8%. Unemployment is expected to be around 10.2%.

After its May 2011 mission to Bulgaria, the IMF expressed relative optimism about the prospects of the Bulgarian economy, saying that Bulgaria's exports have rebounded above pre-crisis levels and are expected to propel real GDP growth to 3% in 2011, as growth rebalances towards the export sector.

The more pessimistic figures came as part of an IMF release forecasting a slowdown of the growth of the global economy, including emerging economies in Eastern Europe.

The Washington-based global lender has called on governments in emerging European nations, which according to its definition includes Bulgaria too, to increase fiscal discipline and help banks reduce bad loans to better cope with the euro region's sovereign-debt crisis.

The fund has voiced concerns over possible financial spillovers because if there are further problems in the financial sector in western Europe that will certainly have repercussions in emerging Europe.

The Bulgarian government however has consistently denied that the country has suffered accelerating capital flight and claims there has been no withdrawal of funds from the many subsidiaries of western banks.

The central bank has described the funds outflow as "part of the free movement of capital".