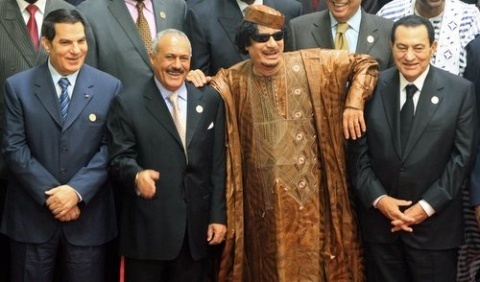 Yemen's long-time dictator Ali Abdullah Saleh has finally stepped down as President after ten months of intense public protests against his rule.

Saleh signed Wednesday in Saudi Arabia's capital Riyadh a power transition agreement endorsed with the mediation of the Gulf Cooperation Council which for provides for a transfer of the presidential post to his deputy Abd al-Rahman Mansur al-Hadi.

The unrest in Yemen has claimed several hundred lives since it started in February 2011 with demands for the resignation of President Ali Abdullah Saleh, who has been in power since 1978.

Under the peaceful power transition plan for Yemen of the Gulf Cooperation Council, Saleh will remain the "honorary president" of Yemen for 90 more days, while Vice President Major Gen. Abd al-Rahman Mansur al-Hadi introduces an interim government in order to hold general elections.

After the signing of the GCC agreement for Yemen, Ali Abdullah Saleh is setting out for medical treatment in New York City.

Yemen's Vice President Major General Abd al-Rahman Mansur al-Hadi is a Yemeni politician who has been the Vice President of Yemen since 3 October 1994, after the unification of North Yemen and South Yemen.

Between 4 June and 23 September 2011, he was the acting president of Yemen, when Ali Abdullah Saleh left for medical treatment in Saudi Arabia, after being wounded in an attack on the presidential palace during the 2011 Yemeni uprising.