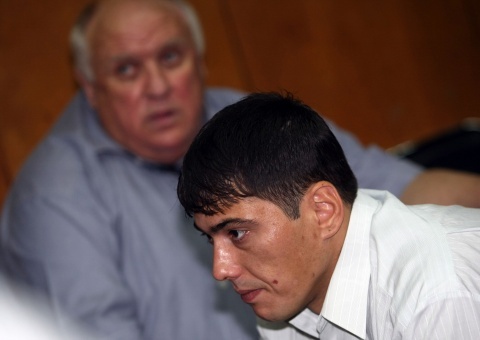 Attorney, Marin Markovski, and defendant, Lazar Kolev (front) are seen in the courtroom. Photo by BGNES

The Appellate Court in Bulgaria's second largest city of Plovdiv confirmed Wednesday the life without parole sentence for Lazar Kolev.

Lazar Kolev, the only suspect in Bulgaria's high-profile "Belneyski" double murder case, was sentenced to a life imprisonment without parole in June 2011, by the lower instance – the Court in the city of Pazardzhik.

The grounds for the latest rule say that Kolev murdered in January 2006 two teen sisters in an extremely cruel way and with premeditation in order to cover up for other crimes – rape and sodomy.

The magistrates say the charges have been proven beyond reasonable doubt and rejected all defense motives for the appeal. The rule can be further appealed within a 15-day deadline with the Supreme Court of Cassations.

The magistrates have examined testimony from 50 witnesses, 40 expert reports, including some prepared abroad.

They fully accepted the DNA analysis, showing that biological material, identical to Kolev's, had been found under the nails of the victims and that it has been categorically proven that the nails belonged precisely to the two sisters. The later has been confirmed by two Bulgarian coroner reports and one prepared in Austria by top-notch experts.

The Court also very carefully examined witness testimony from a cellmate of Kolev, who says the defendant had told him in detail how he met the girls and what he had done to them and decided that the testimony fully coincides with other presented evidence.

The magistrates rejected Kolev's alibi that he spent the night with other people as unfounded because those witnesses later recounted their accounts, saying it was insinuated by relatives of the defendant.

The claim that the sisters were murdered 24 hours before they were found was also rejected over seven experts saying the winter temperatures had a conservation effect, making it possible for the bodies to have stayed at the murder scene for 3-2 days before their discovery.

The Court further discarded an expert report listing the cause of death as a traffic incident while the rapes had been staged as a cover up because another report had proven the injuries were inflicted by kicks and sharp objects. The rapes have also been proven by collected evidence.

The magistrates say the punishment imposed by the Pazardzhik Court is fair and just, over the gravity of the crime and its public threat. They had not found any procedural violations committed by the lower instance and agreed that all requirements of the law had been adhered to along with those of the European Human Rights Convention in an unbiased, full and fair trial.

Sisters Rositsa (18) and Kristina (15) Belneyski went missing in January 2006, after leaving a night club in the town of Pazardzhik. The sisters were found dead at the beginning of February 2006 near the town of Peshtera.