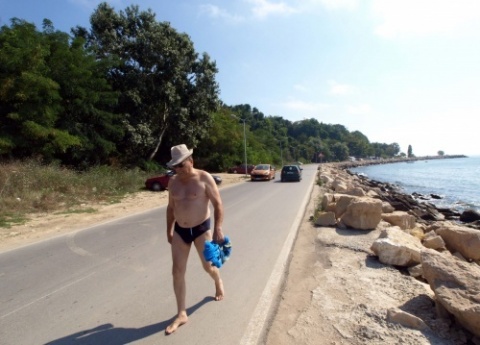 “Alley One,” in Varna's beautiful “Maritime Garden” is a prime beach-front property. Photo by BGNES

The Regional Governor of Varna, Dancho Simeonov, has signed the project for securing a slope in the Black Sea city's Maritime Garden, which is deemed as giving the green light to the controversial "Alley One" project.

The news was reported by the Bulgarian "Dnevnik" daily, citing information published Tuesday on the local administration's site.

The ambitious project of Holding Varna, which is a company belonging to the murky, surrounded by secrecy and legends, business group TIM, foresees the construction of a yacht port, offices of Maritime Administration, hangars for sea vessels, sports and entertainment facilities, food establishments, a fishermen village, a year-round swimming complex with at least three aqua parks, a medical center, and five hotels.

The sale of the beach-front alley land plot to Holding Varna was done with the authorization of the former Governor of Varna, Hristo Kontrov. The deal for, what is deemed to be very low total amount of BGN 11.7 M or BGN 100 per square meter of beach-front terrain was sealed in May 2009, just 2 months before the general elections, which brought into power the center-right Citizens for European Development of Bulgaria (GERB) party, replacing the socialist-led Three-Way Coalition cabinet.

Under the Detailed Urban Plan from 2002, the plot has been slated as an "Urban Coastal Zone" with recreational functions, however, the documents attached to the sale list it as an area for which there isn't urban planning and with "unclear future," leading to a significant price reduction in the appraisal.

According to the 2002 plan, the plot was part of the mega-project "Alley One," to "modernize" the coastal line. But the Black Sea Coast Development Bill, passed in 2008, bans similar projects.

Kontrov claims he had approved the sale on the written request of the former Head of the Bulgarian Investment Agency, Stoyan Stalev, sent in April, 2009, in order to make the realization of the "Alley One" project possible. In 2007, the Agency awarded "Holding Varna" with a certificate for "Class A" investor for the same project, giving the investor the right to acquire terrains necessary for the project's realization. In is unclear, how and why Stalev had recommended the sale of the land in 2009, despite the 2008 construction ban.

The move stirred outrage among local residents and several NGOs, involved in the battle to preserve Varna's beautiful park. Architect Kalina Pavlova, who leads the NGOs protesting against construction in "Alley One," vowed to file a claim with the European Court of Human Rights and the European Commission.

As an argument for the claim that Simeonov's signature gives green light to "Alley One," "Dnevnik" cite the manager of the company, which carried out geological studies in the area, saying "construction planned for this part of Varna's coast will stop any future slides and destruction of the coastal line." He is backed by prof. Bozhidar Bozhnov, a lecturer in the Mining and Geology University in Sofia and a consultant for Holding Varna, who says "the buildings planned for the alley will also serve as fortification facilities for the coast.

At the end of October, the NGOs, which oppose the project, traced the coastal line in the project's zone. Architect Pavlova says the goal was to designate the coastal line as it had been in 1979 – a terrain, which under the State Property and Black Sea Coast Acts cannot be sold and/or purchased.

At the time, Holding Varna requested police assistance to halt any other unauthorized trespassing in their property.

Dancho Simeonov was appointed Regional Governor by the ruling GERB.

TIM were called by former US Ambassador in Sofia, James Pardew "the new leader in Bulgarian organized crime," and the "most modern form of organized crime" by investigative German journalist, Jurgen Roth.