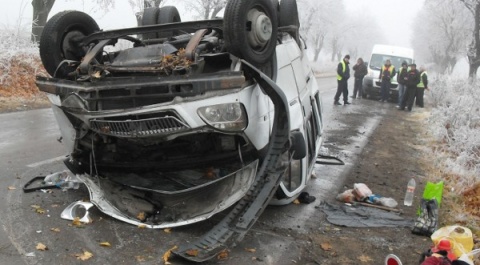 The overturned van was carrying 13 people to work. Photo by BGNES

Eight people have been injured in a serious accident with a passenger van in the northeastern Bulgarian region of Razgrad, police inform.

The accident happened Tuesday morning near the village of Veslets. The van was taking 13 people from a company based in the city of Targovishte to their job location. All were from the nearby town of Omurtag and were working on construction on the Ruse-Silistra road.

The van overturned and ended on its roof on a straight stretch of the road.

The driver is among the injured. He had tested negative for DUI.

The initial version of the police is that the driver lost control on the slippery road. According to unconfirmed reports, the van's tires were not suitable for driving under winter weather conditions.