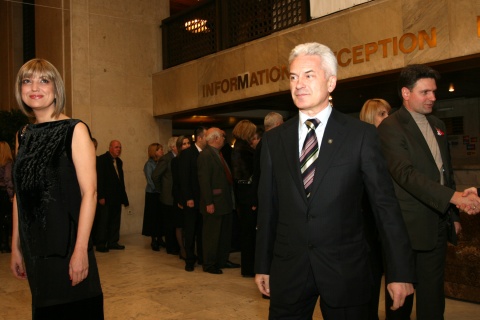 Kapka Siderova and Volen Siderov pictured at a party back in 2009. Photo by BGNES

Kapka Siderova, wife of Bulgarian nationalist party Ataka leader Volen Siderov, has been fired from the position of editor-in-chief of the party's daily newspaper.

This is the latest development in a rift that emerged among the nationalists end of last week, which apparently involves the conflicting allegiances of close family members and alleged lovers.

Last Thursday, Siderova's natural son and Siderov's stepson, MEP Dimitar Stoyanov requested the resignation of Siderov as party leader due to a poor showing in Bulgarian presidential and municipal elections end of October.

This led to the dismissal of Stoyanov from the party, and allegations on the part of Siderov that his wife has coalesced with ruling center-right GERB party to bring the downfall of Ataka, and that her son was acting on allegiance with her.

In the beginning of Bulgaria's 41th Parliament after 2009 general elections, Ataka, the fourth-largest parliamentary group, was instrumental in supporting GERB leader Boyko Borisov's cabinet, which had just a few MPs short of majority.

In the past months however, the relations between Ataka and GERB have gradually soured, culminating in an outright rejection of support for the cabinet on the part of the nationalists.

In the meanwhile, a number of MPs have deserted their parliamentary group and have chosen to sit as non-aligned, splitting their allegiance to Siderov.

On her part, Siderov's wife Kapka has retorted to the family scandal by alleging that the Ataka leader has been infidel to her by courting young Ataka MP Denitsa Gadzheva.

The web of skewed allegiances thickens, when taking into consideration that Gadzheva was Dimitar Stoyanov's girlfriend back in 2005, when Ataka first entered Parliament.

Volen Siderov has rejected the allegations of his wife that he has a lover and has stated that he has separated from hear due to her plotting behind his back.

On her part, Gadzheva has resigned from Ataka's leadership organs in an attempt to reject all claims that she has received key positions due to her alleged amorous relations with the party leader.

In the meantime, renegade Ataka MP Kamen Petkov has suggested for bTV that Kapka Siderova's story might well be the true one.

He also commented that while Siderov has authoritative ways with his party subordinates, he has allegedly always relied on a strong woman beside him to give him guidance.

In the current situation, according to Petkov, Ataka is thus doomed to fail not only because of the split, but also because of a loss of purpose by its leader.