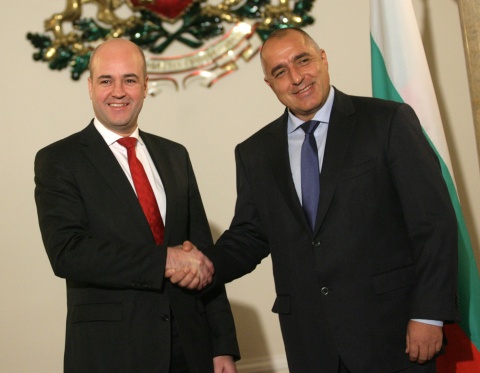 Bulgaria is one of the EU examples about the right way with respect to its finances, Sweden's Prime Minister Fredrik Reinfeldt has declared in Sofia.

Reinfeldt spoke in the Bulgarian capital Monday at a joint news conference with his Bulgarian counterpart Boyko Borisov.

"Bulgaria has the second lowest public debt in the EU, it is adhering to a strict financial discipline, and has to offer stable finances, which is a prerequisite for growth, and the interest of foreign investors," stated the Swedish PM.

He emphasized the fact that Swedish companies such as IKEA and H&M are investing in Bulgaria, and described such investments as a great success promoting Bulgaria.

Reinfeldt further pointed out that Bulgaria has been "discovered" by Swedish tourists, with 40 000 Swedes visiting in 2011.

Borisov in turn expressed Bulgaria's all-out thanks to Reinfeldt, and the government and people of Sweden for the support for Bulgaria's accession to the Schengen Agreement, and the fact that many Swedish companies have taken up investments in the country.

He stressed that Bulgaria can attract Swedish tourists with its archaeology and cultural tourism, and went on to show his Swedish counterpart around the archaeological sites in downtown Sofia.

"I am convinced that after that Swedish media will become interested and Sweden will become one of the major sources of tourists visiting Bulgaria," Borisov said.

The Bulgarian Prime Minister, however, for the time being dashed the hopes of Sweden's Saab that Bulgaria's Defense Ministry might purchase Gripen fighter jets; even though Gripen remains one of the major bidders for the deal, shortage of funds has forced the Bulgarian government to put it off.

During his joint press conference with Reinfeldt, Borisov scolded the heavily indebted states in the EU that have contributed to the euro zone debt crisis.

"For everybody who did affford themselves the luxury of raising their debt, to pretend to be the good uncle or aunt, we all now need to come together in order to help them. The member states which obey fiscal discipline are right to demand that decisions be made by those who are responsible [spenders]," declared Borisov in Sofia Monday.