Bulgarian Nationalist Leader Undaunted by Stepson's Calls for His Resignation 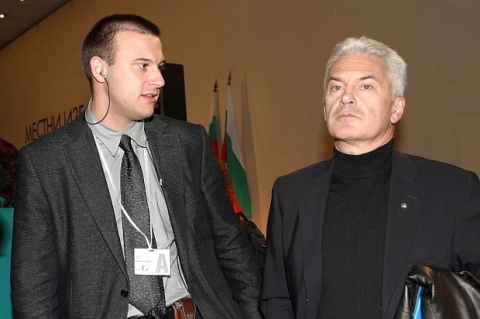 MEP Dimitar Stoyanov has confirmed that he demands the resignation of Volen Siderov, leader of nationalist party Ataka and his stepfather.

In a Friday interview for the Bulgarian Telegraph Agency (BTA), he explained his request with the dramatic defeat the party endured at the end-October presidential and local elections.

Stoyanov insisted that it was a common European practice for party chairs to step down in such circumstances.

The MEP reminded that Siderov had sought left-wing leader Sergey Stanishev's resignation after the Bulgarian Socialist Party (BSP) lost the elections in 2009, scoring a smaller-scale defeat than Ataka's in 2011.

Under standard procedures, Siderov's remaining at the helm should be decided at a national party congress by the end of the year, Stoyanov explained.

Another reason why Siderov had to leave office, the MEP reasoned, was the fact that Ataka, together with the Bulgarian Socialist Party (BSP) and, most notably, the ethnic Turkish Movement for Rights and Freedoms (DPS) party, had submitted a petition with the Constitutional Court for cancelling the presidential vote.

Stoyanov claimed that the step had "legitimized the un-constitutional DPs party, which is something I cannot accept."

The MEP did not recommend a successor to Siderov, saying that the matter was to be decided at the national party congress.

He also mentioned that Siderov was acquainted with his stance because he had attended Monday's meeting of the parliamentary group of Ataka when the issue had been brought up.

Asked to comment on the matter, Siderov neither rejected nor confirmed the claims.

"Ask Dimitar Stoyanov if he is seeking my resignation. Many people have done this so far. I am not worried by anything and the issue will be decided at the national party congress which will be held this year," the nationalist leader responded.

In a follow-up interview for BTA, Siderov shared that he had experienced many betrayals over the past 6 years and that there was nothing that could bewilder or shock him.

"I have seen enough of everything, so I take it as part of the dirty tricks typical for politics," he added, noting that Stoyanov had grown up to be who he was now solely thanks to him.