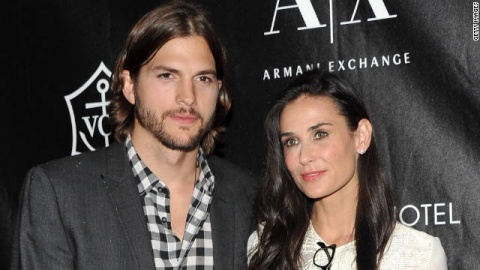 Demi Moore said she plans to divorce Ashton Kutcher. The couple began dating in 2003 and married in 2005. Photo by Getty Images

"It is with great sadness and a heavy heart that I have decided to end my six-year marriage to Ashton," Moore, 49, said in a statement, cited by CNN.

"As a woman, a mother and a wife there are certain values and vows that I hold sacred, and it is in this spirit that I have chosen to move forward with my life," she said. "This is a trying time for me and my family, and so I would ask for the same compassion and privacy that you would give to anyone going through a similar situation."

Kutcher, 33, who currently stars in "Two and a Half Men", broke the news Thursday afternoon on Twitter.

"I will forever cherish the time I spent with Demi. Marriage is one of the most difficult things in the world and unfortunately sometimes they fail. Love and Light, AK"

Moore and Kutcher began dating in 2003 and married in September 2005.

It was the first time to tie the knot for Kutcher, the third for Moore. Before Bruce Willis, Moore was married to rock musician Freddy Moore.