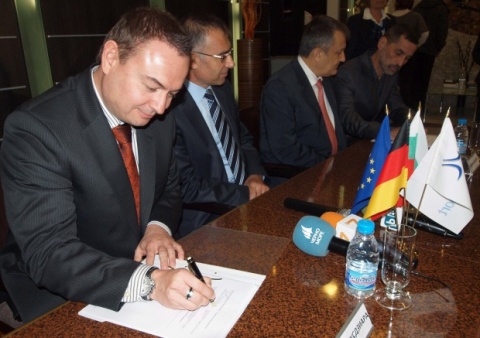 Fraport Twin Star singed a contract for the construction of BGN 130 M terminals at Varna and Burgas airports with Turkey's TIE-ICDAS. Photo by BGNES

On Tuesday, Fraport Twin Star Airport Management signed the contract for the construction of the new terminals with the selected constructor, Turkish consortium TIE-ICDAS, Fraport announced.

The construction of the two passenger terminals is estimated to cost the concessionaire a total of BGN 130 M.

As early as July 2011, the concessionaire of the Bulgarian Black Sea airports Varna and Burgas Fraport Twin Star Airport Management announced plans to invest BGN 170 M in their modernization in the next 3 years.

Fraport Twin Star CEO Dirk Schusdziara explained that BGN 40 M will poured in the overhall of the Varna Airport runway – a project that commenced as scheduled in October 2011 – and the rest will go for the construction of the new passenger terminals.

During modernization projects at Varna Airport and Burgas Airport in the next three years, the company will create 1 500 new jobs, he said.

BGN 12 M have already been poured in the Burgas Airport where a new administrative building has been built.

Fraport Twin Star Management plans to expand the terminals in both Varna and Burgas; after the expansion, Burgas Airport will be capable of handling 2.7 million passengers a year, and Varna – 1.8 million passengers.

According to Schusdziara, the greater number of passengers in Burgas is due to the fact that the Burgas region, i.e. Bulgaria's southern Black Sea coast features a greater number of hotels and resorts than the northern coast around Varna, which itself is a bigger city than Burgas.

The airports in Black Sea cities Varna and Burgas have been granted on concession to Fraport Twin Star Airport Management company, a German-Bulgarian consortium between the Varna-based TIM group's holding "Chimimport" (40%) and the German "Fraport", since 2006.

In 2010, Fraport Twin Star Airport Management paid the Bulgarian state a total of BGN 13 M for the concessions of Varna Airport and Burgas Airport.