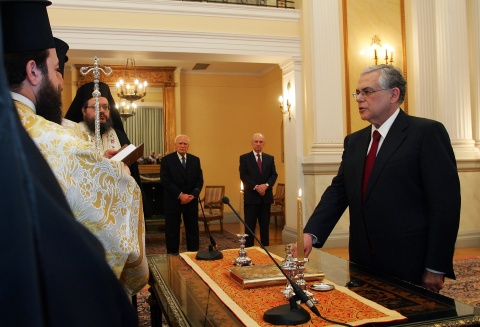 Greece`s newly appointed Prime Minister Lucas Papademos (R) is sworn in during a ceremony in the presence of President Karolos Papoulias (C) at the Presidential Palace in Athens, Greece, on 11 November 2011. EPA/BGNES

Greece's new interim Cabinet has been sworn in, with Lucas Papademos taking over the premiership and Evangelos Venizelos staying on as finance minister.

The caretaker coalition government of Greece was sworn into office in the late afternoon on Friday, DPA reported, after the ceremony was put off by a couple of hours.

Papademos, a 64-year-old technocrat and former vice president of the European Central Bank, was appointed on Thursday to head the interim coalition government which includes 48 ministers from Greece's two largest parties and a smaller right-wing party.

The EUR 130 B bailout package includes provisions for private bondholders to take a 50% haircut on their Greek debt holdings.

The Greek government is to take on a caretaker role until elections are held. Shortly after being named, Papademos dismissed reports suggesting the poll would be held on February 19, saying no firm date had yet been set.

The new government will face a confidence vote in parliament in the coming days.

Papademos' appointment comes after a two-week political crisis that threatened to unravel the EU bailout plan and raised questions about Greece's continued membership in the eurozone.

Speaking to journalists outside the presidential palace on Thursday, Papademos said the country's economy faced major problems despite months of austerity. He stressed that the priority was for Greece to remain in the eurozone.

A former economics lecturer at Columbia University in New York, Papademos played a key role in preparing Greece for eurozone membership, but has never held a political office before.

His government will be urged to approve the debt deal and secure the next 8 billion euro installment of the country's euro bailout. Without the emergency funding, Athens would default by mid-December, experts say.