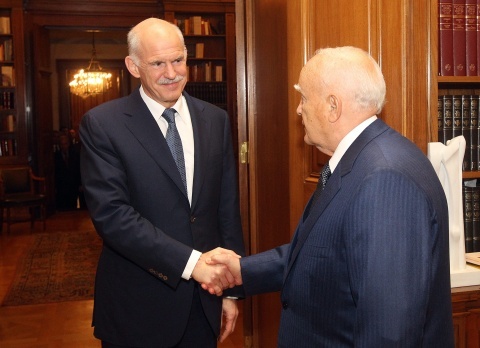 Greek politicians are set to hold a fourth day of talks to name a new prime minister amid fierce political wrangling and perilous power vacuum.

Talks between the three parties expected to join a new government of national unity - George Papandreou's Pasok, New Democracy on the centre-right, and the nationalist Laos party – broke down on Wednesday after the nationalists walked out.

Former European Central Bank vice-president Lucas Papademos was an early front-runner to be the next prime minister. However, later reports suggested his candidacy had run into trouble after he set new terms for joining the cabinet, including more power for the New Democracy party in the new government, and the possibility that the coalition could go on beyond the provisional date set for early elections, 19 February.

A number of other names have been mentioned to succeed Mr Papandreou as prime minister. They include: parliamentary speaker Philippos Petsalnikos, who is also a former justice minister, Vassileios Skouris, president of the European Court of Justice, Law professor Ioannis Koukiadis, EU ombudsman Nikiforos Diamandouros, Panagiotis Roumeliotis, Greece's representative to the International Monetary Fund (IMF).

Greece's Socialist Prime Minister George Papandreou formally resigned his post on Wednesday even though the name of his successor, who is to head a caretaker government, remains unclear.

George Papandreou said in a televised address that a government of national unity would do whatever was necessary to bring Greece out of crisis.

"Greece wants the international community to see that it knows how to be united in the face of difficulty," he said, as cited by CNN.

In the television address before heading to meet the president, Papandreou wished the new prime minister well without giving any name and declared that Greece had avoided bankruptcy.

He also said the new government would win approval for Greece's 130 billion euro bailout deal and secure the nation's membership of the euro zone despite its crisis.

"I am proud that, despite the difficulties, we avoided bankruptcy and ensured the country stayed on its feet," he said. "I want to wish the new prime minister success, I will support the new effort with all my strength."

"Today, despite our differences -- political and social differences do exist -- we have put aside our fruitless conflict and disagreement," Papandreou said.

After the televised address, Papandreou headed to the presidential mansion to tender his resignation to President Karolos Papoulias.