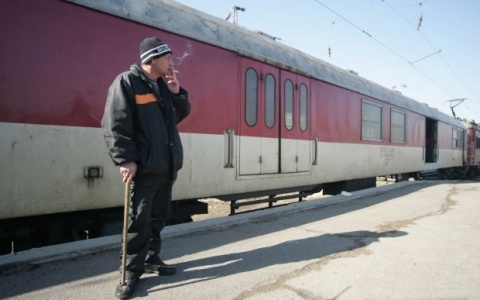 The EC has started to probe BDZ just as 13 000 Bulgarian railway workers are to go on a general strike over the expected layoffs of 2000 of them. Photo by BGNES

The already vastly troubled and insolvent Bulgarian state-owned railway company BDZ has now become the subject of an investigation by the European Commission.

The European Commission has opened an in-depth investigation into a restructuring aid plan for Bulgarian state-owned railway company BDZ, the EC announced Wednesday.

"The Commission has doubts that the plan is appropriate to restore the company's long-term viability and whether it contains sufficient measures to ensure the company's own contribution to the restructuring costs and to off-set distortions of competition. The opening of an in-depth investigation allows interested third parties to comment on the measures under investigation. It does not prejudge the final outcome," the Commission said in a statement.

It explained that in May 2011, Bulgaria notified it of a BGN 550 M (approx. EUR 278 M) capital increase for BDZ to be provided in six tranches over the period 2011-2016 in order to help restructure the company, which has been in financial difficulties for several years, namely by repaying some of its debts.

The capital increase plus cost-reduction measures, the sale or scrapping part of the rolling stock and a reduction in the workforce are expected to return the company to viability in 2012, according to the plan submitted by Bulgaria, the EC stressed in its announcement.

The EU executive pointed out that BDZ operates both freight and international passenger railway services. It carries out80 % of domestic freight transport and 100 % of passenger transport.

At the end of 2010, the Commission temporarily approved public financing of BGN 249 M (approximately EUR 128 M) towards the company because of the disruption its sudden disappearance would have provoked and to allow time for Bulgaria to submit a restructuring plan ensuring its future viability and other key aspects.

"The aid has, however, not been paid out. The Commission has a number of doubts about the restructuring plan submitted in May, including on the viability aspect since the plan lacks several crucial elements, such as whether the company would still be viable were the revenue forecasts contained therein too optimistic. Bulgaria has also provided no evidence that the privatization of BDZ' freight subsidiary will be sufficient to compensate for the distortions of competition or indeed that it represents an adequate contribution of the company to its restructuring costs since the timetable and outcome are uncertain," Brussels stated.

The write off by the State of debts accumulated by BDZ prior to Bulgaria's accession to the EU, in January 2007 might be compatible with EU state aid rules, according to Section 4 of the EU's Railway Guidelines but to date Bulgaria has not provided the necessary clarifications for a proper assessment, the EC explained further.

According to the Commission, Rescue and restructuring aid is highly distortive of competition as it goes to one company only to the detriment of others. The 2004 EU Rescue and Restructuring Guidelines set as conditions that the restructuring plan is such as to restore the company's long-term viability on the basis of realistic assumptions.

This is to avoid that the company keeps asking for government support. The plan must also include measures to compensate for the distortions of competition. Such measures typically include capacity and market share reductions or the lowering of entry barriers. Finally, the beneficiary needs to make a significant own contribution to the costs of restructuring.

The Commission reminded that in July also opened an in-depth investigation to verify whether restructuring measures in favour of the Greek state-owned railway company TRAINOSE are in line with EU state aid rules.

The non-confidential version of the BDZ investigation decision will be made available under the case number SA.31250 in the State Aid Register on the DG Competition website once any confidentiality issues have been resolved. New publications of state aid decisions on the internet and in the Official Journal are listed in the State Aid Weekly e-News.

The management of the state-owned BDZ Holding announced last it intended to lay off 2 000 workers, and reduce the number of trains in operation by 150 by January 2011, which led the syndicates to declare a mass strike as of November 24, 2011.

The syndicates have been demanding a new collective labor contract from the BDZ company, and have risen up against the intended privatization of the only profitable unit of BDZ, BDZ Freight Services.

The austerity measures are supposed to help stave off the bankruptcy of the hugely troubled state railway company BDZ, declared at a news conference the head of the BDZ Board Vladimir Vladimirov.

The termination of the 150 trains will save BGN 22 M annually, and about BGN 105 M over the next five years; the funds in question are to be used to cover some of the debts of the ailing state company, according to Yordan Nedev, BDZ CEO.