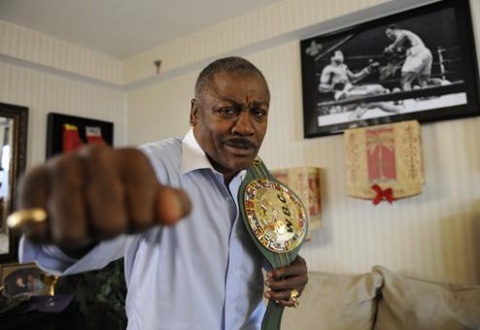 Smokin' Joe Frazier, seen here in August 2009 in North Phladelphia, won a gold medal in boxing at the 1964 Summer Olympics in Tokyo and was a former undisputed heavyweight champion from Febraury 1970 until January 1973. Photo by USA Today

Former world heavyweight boxing champion Joe Frazier has died only a few weeks after being diagnosed with liver cancer, his family said.

"We The Family of ... Smokin' Joe Frazier, regret to inform you of his passing," the statement said. "He transitioned from this life as 'One of God's Men,' on the eve of November 7, 2011 at his home in Philadelphia, Pennsylvania."

Frazier - also known as Smokin' Joe - had been receiving hospice care in Philadelphia after being diagnosed with cancer several weeks ago.

On Sunday, Frazier's manager Leslie Wolf said the boxer's condition was very serious but that doctors and Frazier's team were "doing everything we can".

Frazier won an Olympic gold medal in 1964 after going to the Games as a replacement for Buster Mathis, who had beaten him in the trials but could not attend the Games due to an injury.

The famous boxer held the world title between 1970 and 1973. He won the heavyweight title in 1970 by defeating Jimmy Ellis in New York. Three years later he lost the title to George Foreman.

But Frazier is perhaps most widely-known for three great fights with Ali, including the epic Thriller in Manila in 1975.

The 67-year-old was the first man to beat Muhammad Ali in 1971, but lost his next two bouts with Ali.