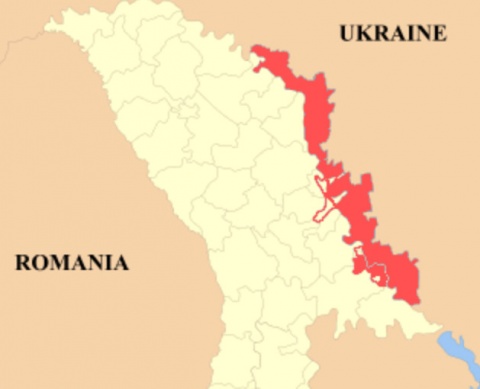 The conflict with Transnistria's status (in red on the map) continues to remain unresolved. Map from Wikipedia

On behalf of the Bulgarian government, Mladenov welcomed the recent presentation of an action plan for visa matters and the start of talks between Moldova and the EU for a Deep and Comprehensive Free Trade Area (DCFTA), within Moldova's participation in EU's Eastern Partnership Program directed at the former USSR republics in Europe.

Bulgaria's top diplomat stressed before his Moldavian counterpart that the establishment of legitimate and stable state institutions in the Republic of Moldova is of primary importance.

Mladenov has also reiterated Bulgaria's support for the official resumption of the talks on the status of the so called Transnistria, a breakaway Moldavian province without international recognition.

In February 2011 the so called "5 + 2 Talks", which include Transnistria, Moldavia, Ukraine, Russia and the Organization for Security and Cooperation in Europe (OSCE), plus US and EU as external observers, were started again in Vienna.

"We hope that all participants in the talks will exert their constructive efforts for finding a mutually acceptable solution of the Transnistria conflict by observing the unity and territorial integrity of the Republic of Moldova," the Bulgarian Foreign Minister declared in Bucharest.

Mladenov and Leanca also discussed the situation of the teaching of Bulgarian language and the faculty in Bulgarian schools.

Moldova has 34 schools teaching Bulgarian, the Foreign Ministry in Sofia pointed out. The former Soviet republic is the home of one of Bulgaria's largest "historic" minorities abroad, estimated at some 100 000-200 000 people.

The Bulgarian minorities in the region of Bessarabia formed in the 16th-19th century when people from Bulgaria proper fled atrocities in the Ottoman Turkish Empire to the safety of the region which was back then part of the Russian Empire.