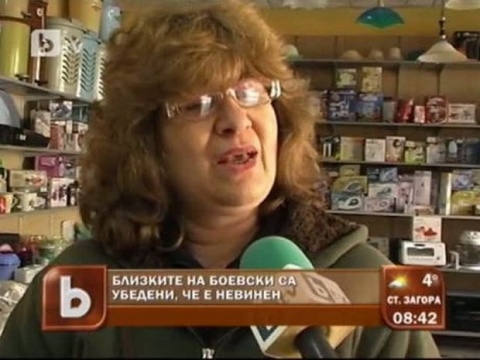 Stela Boevska, mother of Bulgaria's legendary weightlifter, Galabin Boevski, declares her son is innocent and had always been against illegal drugs. Photo by bTV

Stela Boevska, mother of Bulgaria's legendary weightlifter, Galabin Boevski, is convinced her son is innocent, declaring he had always been against illegal drugs.

Galabin Boevski, 36, a Bulgarian Olympic weightlifting champion, was arrested on October 25th for possession of 9 kg of cocaine at the Guarulhos Airport in Sao Paulo, Brazil. The drug was found hidden in special secret compartments inside his suitcase.

"No, never, he had always adamantly opposed drugs and drug use. He never wanted to have drugs in Bulgaria over fears kids become addicted. For him to be transporting cocaine – this is absurd, impossible," the mother said during a Friday interview for the TV channel bTV, pointing out she had almost no news from her son, except one single letter.

"Hello to all, who are thinking about me, believe me – I am not guilty at all; don't be ashamed from me; I love you and hug you; I kiss you," the letter red.

Boevska accused Bulgarian authorities of not collaborating, including with information on the case.

She insists her son's family was not having money trouble and led a normal life.

Several days ago, the Bulgarian Trud (Labor) daily reported that according to the Trade Register, the former weightlifter, who now owns several of Sofia's most upscale fitness facilities, had shares in four companies, whose debt was listed at BGN 2.14 by December 31, 2010, while the assets were BGN 1.83 M.

On October 27, Bulgaria's Foreign Affairs Ministry confirmed Boevski's arrest. It was also reported that he had made full confessions to Brazilian authorities.