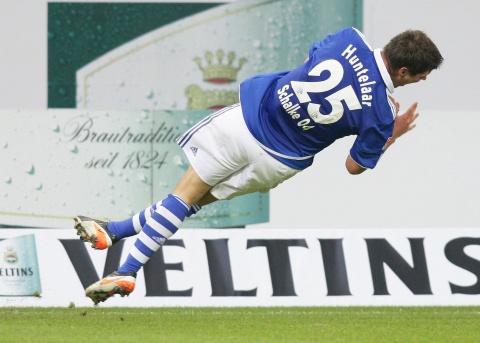 Schalke`s Klaas-Jan Huntelaar will not join the Red Devils in exchange for their unsettled striker Dimitar Berbatov. EPA/BGNES

German team Schalke have refuted the recent media statements that their prolific forward Klaas-Jan Huntelaar may be heading to Manchester United in exchange for Dimitar Berbatov.

"We have no ambition to transfer him. He is showing top standard performances this season and it is pretty much usual those performances are getting noticed by top-quality clubs," Schalke's

general manager Horst Heldt has commented on the reports, clarifying that no offers have been received for Huntelaar.

The German team's general manager has further reminded that the Dutch forward has a contract signed with the club until 2013 and is indispensable to them.

Huntelaar, who has already been linked with the Red Devils on a number of occasions, has scored 16 goals in 18 appearances for the German outfit this season.

Berbatov has been out of Manchester United's pecking order for a while now, with the likes of Javier Hernandez, Danny Welbeck and Wayne Rooney leaving him virtually no chances to shine. The Bulgarian is said to be a target for a number of clubs, including Inter Milan, Juventus and Bayern Munich