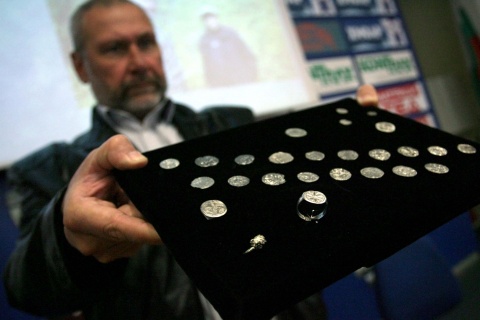 Prof. Nikolay Ovcharov displays the 18 gold coins found by his team at the medieval Bulgarian fortress Urvich near Sofia. Photo by BGNES

A total of 18 gold coins minted by medieval Bulgarian Tsar Ivan Alexander (r. 1331-1371) have been discovered by the team of renowned Bulgarian archaeologist Prof. Nikolay Ovcharov.

The coins were found during excavations of the medieval fortress Urvich near Sofia by the archaeologists led by Prof. Ovcharov and Prof. Boni Petrunova from the National Archaeological Institute.

The coins were described as the "treasure of the Shishman Dynasty", which ruled Bulgaria from the ascension of Tsar Ivan Alexander to the throne in 1331 AD to the demise of his sons – Tsar Ivan Shishman (r. 1371-1395) and Tsar Ivan Sratsimir (r. 1371-1396) in the hands of the Ottoman Turks when the Ottoman Turkish Empire conquered the Balkans in the 14th century.

Ovcharov admitted that it is an overstretch to speak of a "treasure" when only 18 coins are available but he insisted the term should be used as a reference to what was believed to be the treasure of Tsar Ivan Shishman that he buried at the fortress of Urvich where he made a stand against the invading Ottoman Turkish forces in the 1370s and 1380s.

The archaeologist believes that Tsar Ivan Shishman's treasure really existed but that most of it was snatched by treasure-hunters and that the 18 gold coins are everything that is left of it.

"These coins were burred sometime between 1371 and 1372. This is precisely the "treasure" of the Shishman Dynasty since the rest of it has been stolen by treasure hunters," stated Ovcharov, who is also known as the "Bulgarian Indiana Jones."

The Urvich fortress which is located some 20 km southeast of Sofia was first excavated in 1969 by Ovcharov's father, Prof. Dimitar Ovcharov.

The archaeological excavations there have already unearthed murals from the St. Iliya (St. Elijah) Church and the respective monastery, and have presented to the public some of the frescoes.

After the Second Bulgarian Empire was conquered by the Ottoman Empire in 1393-96 AD, the Urvich fortress was set on fire but was later rebuilt and used by the Ottoman Turkish invaders; the local monastery was also restored.

Ovcharov emphasized that there is information about the monastery at Urvich in the first History of Bulgaria, the Slavic-Bulgarian History, compiled by the Bulgarian monk Paisiy Hilendarski in 1762 AD. The St. Iliya Church itself was fixed in the 15-17th century.

Ovcharov and Sofia Mayor Yordanka Fandakova, who also attended Wednesday's news conference, expressed their hopes and intentions to use the archaeological discoveries at Urvich for the development of cultural tourism.

"Sofia has the chance to turn into a top tourist destination that is a leader in global cultural tourism," Sofia's newly elected mayor vowed.

Ovcharov in turn pointed to the example of the Ancient Thracian rock city of Perperikon in the Rhodope Mountains, known as the Bulgarian Machu Picchu, which has already been turned into a primary tourist destination based on his excavations in the past 5 years.

A detailed interview of Novinite.com (Sofia News Agency) with Professor Nikolay Ovcharov in which he talks about the Urvich fortress READ HERE