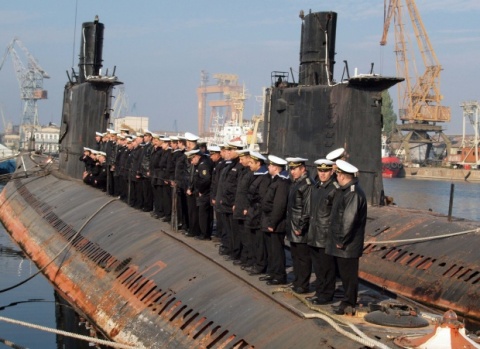 Bulgarian Navy servicemen at the ceremony for the retirement of the last operational Bulgarian submarine "Slava" (i.e. "Glory"). Photo by BGNES

The Bulgarian Navy has formally shut down its submarine unit at a ceremony in the main naval base in the Black Sea city of Varna.

The ceremony was attended by Read Admiral Plamen Manushev, Commander-in-Chief of the Bulgarian Navy, navy servicemen, and veterans, reported BGNES.

The commander of the submarine division of the Bulgarian Navy Capt. Kamen Kukurov delivered the flag of the Slava submarine to the Varna Museum of Military History.

The life of the only operational Bulgarian submarine "Slava" (i.e. "Glory") expired, and it is to be retired in the coming months which will mean shutting down altogether Bulgaria's submarine force.

Bulgaria's submarine force was formally set up as an individual unit during World War I, in 1916. After the end of the war, however, it was shut down as part of the provisions of the Treaty of Neuilly-sur-Seine of 1919 in which the Allies banned Bulgaria from having submarines.

The only other Bulgarian submarine that was operation in the recent years was the Nadezhda (i.e. "Hope"); it has practically been retired for ten years because it lacks a battery. At the beginning of 2009, the Bulgarian Navy considered turning it into a museum.

The mid 1980s, and especially 1983-1985 were the "height" of the Bulgarian submarine force with four fully operational submarines. Two of them were retired immediately after the fall of the communist regime in 1989 because of lack of funds. In 2007, the general staff of the Bulgarian Navy promised that its modernization strategy will provide for purchasing two new submarines, the first of which was supposed to arrive in Varna in 2012. However, these plans have seen little development.

In July 2010, there were announcements the Bulgarian Navy will most likely acquire two second-hand destroyers from the Netherlands in 2014 but those have remained unconfirmed.

In early 2010, the senior command of the Bulgarian Navy suggested it could contribute a newly-bought second-hand frigate to the operations patrolling against Somali pirates in the Indian Ocean but such suggestions spurred vastly negative reactions from the Bulgarian government as such a mission would turn out to be very costly. In 2010, Bulgaria has been contributing one naval officer to the EU NAVFOR Somalia, EU's operation countering Somali piracy.