Bulgarian Researchers Tie the Noose, PM: Get a Life! 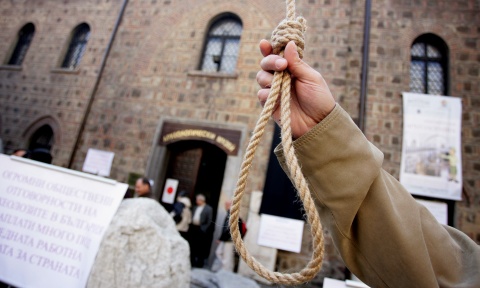 Tuesday researchers from BAS have argued that cabinet has entered the last stage of a campaign to destroy the institution. Photo by BGNES

Researchers from the Bulgarian Academy of Sciences have gone on protest Tuesday against the latest budget cut for their institution previewed in Bulgaria's state budget for 2012.

November 1 in Bulgaria is celebrated as Education Day, and researchers have chosen it as the date to stage their protest against what they see as the Bulgarian government's persistent policy to stifle science in the country.

Hundreds of researchers have walked out with nooses around their necks to demonstrate what the 9% budget cut would do to Bulgaria's oldest research institution.

Bulgaria's center-right GERB cabinet, led by PM Boyko Borisov and vice-PM and FinMin Simeon Djankov, has already staged massive close to 40% budget cuts against BAS in the state budgets for 2010 and 2011.

Now, with a further BGN 5 M cut, the Academy's budget has been reduced to little over BGN 50 M, what researchers claim is well below the sanitary minimum required for even payment of salaries and bills.

In a separate interview Tuesday morning, Bulgarian PM Borisov has argued that BAS's budget is practically the same as last year and that researchers need to go looking for money on their own.

"Money, money - that's all I hear. The Academy were reformed, let them just go out and earn some money for themselves," said Borisov.

Minister of Finance Djankov on his part has a long record of issuing dismissive comments regarding the Academy.

Senior BAS representatives on their part have argued that the cabinet's funding cuts are part of a larger plan to liquidate the Academy and seize its assets.

BAS president Nikola Sabotinov and research secretary Stefan Hadjitodorov have said that the budget cuts could necessitate shutting down institutes and discontinuing vital activities such as the national weather service and seismology survey.

A candle vigil is scheduled for later Tuesday, 6 pm in front of the BAS main building right next to the house of parliament in downtown Sofia.