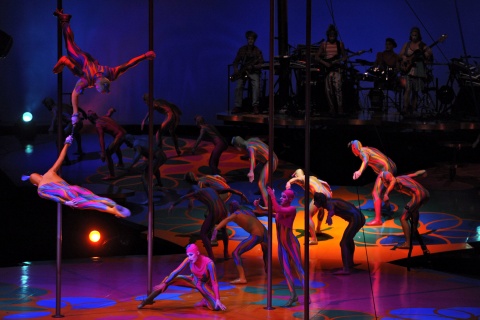 Performance on Chinese poles in a scene of the Cirque du Soleil show Saltimbanco in the St. Jakobshalle in Basel, Switzerland, 01 December 2010. EPA-BGNES

The shows could be seen on February 3 2012 (Friday) and February 5 2012 (Sunday) in Sofia's newly constructed Arena Armeets hall, Sofia Music Enterprises has announced.

In Sofia, the unique Canadian entertainment company will perform one of its many shows, Saltimbanco.

Saltimbanco -from the Italian "saltare in banco", which literally means "to jump on a bench"-aims at exploring the urban experience in all its myriad forms: the people who live there, their idiosyncrasies and likenesses, families and groups, the hustle and bustle of the street and the towering heights of skyscrapers.

"Between whirlwind and lull, prowess and poetry, Saltimbanco takes spectators on an allegorical and acrobatic journey into the heart of the city" is how the show is described on the art company's official website.