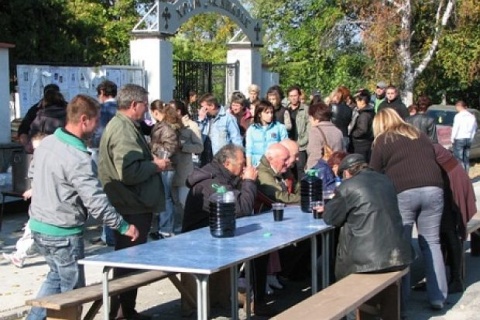 Villagers of the Plovdiv village of Katunitsa in Bulgaria gathered in a traditional service of commemoration of Angel Petrov, who was intentionally killed by a van end of September.

Angel was ran over by a van allegedly commissioned by notorious local Roma clan leader Kiril Rashkov, aka Tsar Kiro, over a long-standing inter-family dispute.

This led to local villagers assembling in front of Tsar Kiro's estates on two consecutive nights and inflicting serious damage on them.

The Katunitsa events of September 23 and 24 led to protests across the country against what some saw as toleration on the part of the state of senior members of the criminal world.

The rallies across the country regrettably took on some clearly racist overtones, with protesters chanting anti-Roma slogans.

Tsar Kiro and members of his family were detained swiftly after and now face court charges.

Saturday Katunitsa residents said they hoped the family, which was driven out of the village for safety reasons, will never return.

They also vowed to build a monument for Angel and Pavel using the voluntary donations they have been collecting since the tragic incident.