Bulgaria Eager for EU-Korea FTA to Kick In, Forum Finds 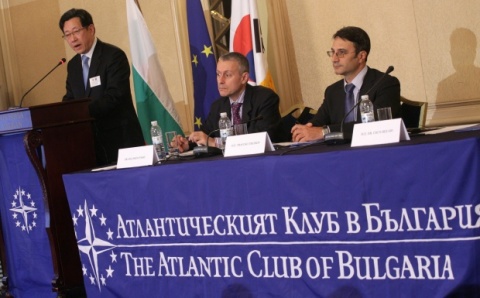 South Korea is a priority economic partner for Bulgaria, Bulgarian Minister of Economy, Energy, and Tourism Traikov declared at a forum in Sofia dedicated to the Free Trade Agreement between the East Asian nation and the EU.

"The efforts of the Bulgarian government are directed at attracting Korean investments in sectors with great potential such as electronics and engineering, car parts manufacture, machine-building, electric cars, IT, agriculture, energy, transport and logistics, hi-tech parks and industrial zones," Traikov explained before the forum organized by the Atlantic Club of Bulgaria and the Embassy of the Republic of Korea in Sofia.

"Bulgaria has the potential to be the entry point of Korean goods for the European market," the Economy Minister added during a panel in which he took part together with South Korean Ambassador to Bulgaria Chun Bi-ho and Atlantic Club President Solomon Passy.

The EU-Republic of Korea Free Trade Agreement was signed in October 2010, and entered provisionally into force in July 2011 while its final ratification is taking place.

Traikov announced that a Bulgarian commercial attach? will start work in Seoul in November 2011.

Over 90% of the Bulgarian goods – antibiotics, hydraulic engines, electric equipment, grain - will be entering the Korean market duty free as a result of the FTA, which will remove EUR 1.6 B worth of annual duties on EU goods.