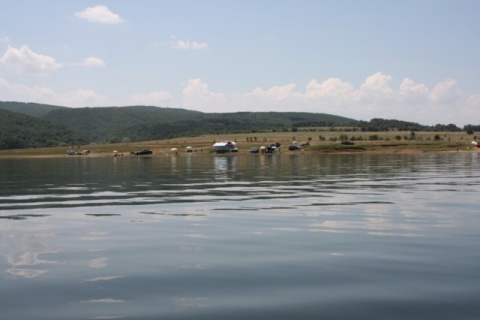 File photo of the Ognyanovo water reservoir in Southwestern Bulgaria

Bulgaria-based NU Boyana Film Studios has issued a statement clarifying that it has nothing to do with the tragic accident on Thursday, in which one stuntman perished and another was critically injured.

The accident took place in the Ognyanovo water reservoir in Southwestern Bulgaria and involved members of the movie's second unit. The first unit was in the resort town of Bansko at the time of the accident, or approximately 2.5 hours away from Ognyanovo.

"It is with great regret that we confirm this unfortunate accident," Nu Image/Millennium Films stated. "Our hearts go out to the families and those on the production affected by this tragedy. The  filmmakers are working closely with the authorities in responding to and investigating this accident," the production company also declared.

Two stuntmen were in a rubber boat when a planned bomb explosion went wrong around 7:00 pm local time on Thursday. One of them died on the spot while the second one was taken to the Tokuda hospital in Sofia and listed with severe trauma. No Bulgarians have been harmed by the accident.

"The Expendables 2", which is been shot at the NU Boyana Studios in Sofia, has brought an array of Hollywood action movie legends to Bulgaria such as Arnold Schwarzenegger, Silvester Stallone, Bruce Willis, Jean-Claude Van Damme, Chuck Norris, and Jason Statham among others.