Killer of Bulgarian Girl in US Sentenced to Death 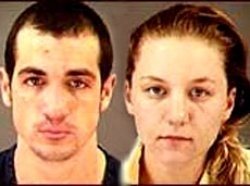 Joshua Kevin Drucker (left) and Melissa Suzanne McCrayer have been arrested for the slaying of Bulgarian Lora Nikolova and her US boyfriend David Robertson. Photo by ajc.com

Jurors in Atlanta, Georgia, US, have issued a death sentence for Joshua Kevin Drucker for the murder of Bulgarian student, Lora Nikolova.

The jurors discussed the sentence only for 2 hours late Thursday before deciding on the death penalty, the Bulgarian TV channel bTV reports Friday.

Nine days ago, the jurors from the same Court found Drucker guilty in the double homicide.

Nikolova's entire family – mother, father and brother were in the courtroom to hear the decision of the jurors. They have thanked the Prosecutors in the case.

In her final plea, Senior Assistant District Attorney at Cobb County, Ann Harris stated Drucker deserved the harshest punishment because the murders have been committed with shocking premeditation and brutality.

Bulgarian Lora Nikolova, 25, and her American boyfriend, David Andrew Robertson, 40, were found dead in Robertson's home in a suburb of Atlanta in April 2004.

Joshua Kevin Drucker, 25, of McDonough was charged with felony murder and credit card fraud. Melissa Suzanne McCrayer, 20, of Roswell was charged with murder, robbery and accessory to a crime.

The jurors rejected the defense claims that the murder was triggered by Drucker's desire for revenge – 14 months before the shooting Drucker had called Andrew and told him that his sister Amanda has overdosed with drugs he sold to her and has passed out. The girl has been fully incapacitated since then.

The Prosecutor countered that the incident with Amanda has happened over a year before the double murder.

The defense council asked the jury to issue a not-guilty verdict for Drucker on the grounds the shooting had not been premeditated and the gun had fired incidentally during a struggle between Lora and the defendant after Andrew had been gunned down.

The second stage of the trial will be held in Atlanta later Tuesday when it is going to be decided if Drucker will be sentenced to death as the Prosecutor is asking.

Lora Nikolova, a Sofia resident, arrived in Atlanta in July 2003, after joining a students' summer work program. She had a job as a swimming pool lifeguard and after meeting Robertson decided to settle in the US.

On the evening of April 5, 2004, Drucker and McCrayer, both said to have been drug addicts, went to Robertson home. They have known each other for years, but in the last months Druker's drug problems increased; he asked non-stop for money, and was not welcome in the house, the Bulgarian 24 Chassa (24 Hours) daily writes.

According to McCrayer's testimony, Robertson invited them in, while Lora had been in her bedroom. The young woman had no idea her boyfriend was armed and had intentions to kill. The two, however, knew Robertson had withdrawn from his bank account USD 30 000 for a trip to Bulgaria and possibly a wedding. Drucker shot him in the back while he was walking to the kitchen. Upon hearing the shot, Lora came running from the bedroom and was shot in the neck. The two perpetrators left in one of Robertson's cars, after searching the house and taking all credit cards, leaving her on the floor, still alive.

They booked a motel room, but later decided to return to look for more valuables. They found Lora alive and Drucker shot her in the head. They came back a total of three times, taking everything, including Lora's diamond ring and her cheap cell phone.

Lora's brother, who also lived in the US, was called to identify the body.

Even before the murder, the young man had a long rap sheet, including robberies and drug possession, but it is said that the influence of his father – a pastor, helped him get away only with probation.

Lora's family filed an application with the Human Rights Committee at the Bulgarian Parliament, asking for assistance, similar to the one in the murder case of Simeon Popov, a Bulgarian student gunned down in 2002 in NY State while delivering pizza.

In Popov's case, an employee of the Bulgarian Embassy had accompanied the young man's family, helping them with accommodations, interpreting and transport during the trial.