Who Is Who: Toppled Libyan Dictator Muammar Gaddafi 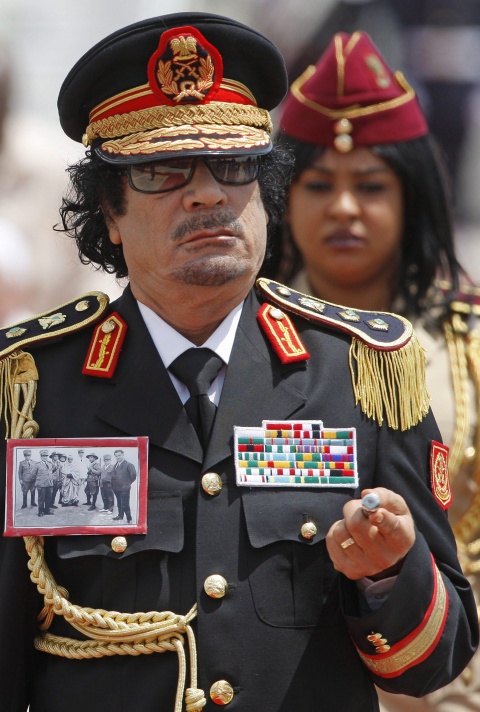 Libya's long-serving dictator Muammar Gaddafi was toppled by a popular uprising on August 22, 2011, and was captured by rebel forces on October 20, 2011, after two months in hiding.

Gaddafi's dictatorship has been power in Libya since September 1, 1969, after Gaddafi removed Libyan King Idris in a bloodless coup.

Muammar Gaddafi was born in the desert near Sirte in 1942. In his youth he was an admirer of Egyptian leader and Arab nationalist Gamal Abdel Nasser, taking part in anti-Israel protests during the Suez crisis in 1956.

He received military training in Britain before returning to the Libyan city of Benghazi and launching his coup there on September 1, 1969.

Gaddafi has technically ruled Libya under a political philosophy of his own termed the Third International Theory, which rejects both capitalism and communism (in the Cold War Days), and was based on ideals of Arab nationalism and socialism, combined with aspects of Islam.

He laid out his political philosophy in the 1970s in his Green Book. In 1977, he invented a system called the "Jamahiriya" or "state of the masses", in which power is meant to be held by thousands of "peoples' committees".

In 1979, he stated that Libya was a direct democracy and relinquished the title of prime minister. He has since been called the "Brother Leader and Guide of the Revolution".

Libya has a law forbidding group activity based on a political ideology opposed to Col Gaddafi's revolution. The regime has imprisoned hundreds of people for violating the law and sentenced some to death.

During his rule, he took active measures to influence foreign governments, supporting paramilitary organizations and terrorists.

Early on he sent his army into Chad, where it occupied the Aozou Strip in the north of the country in 1973. In the 1980s, he hosted training camps for rebel groups from across West Africa, including Tuaregs, who are part of the Berber community. More recently he has led efforts to mediate with Tuareg rebels in Niger and Mali.

The United Nations called Libya under Gaddafi a pariah state, and the United States held Libya on its list of states sponsoring terrorism from 1979 to 2006.

In 1986, Gaddafi's compound and much of Libya was bombed by the United States in retaliation for the 1986 Berlin disco bombing. He was described as a "mad dog" by US President Ronald Reagan.

Gaddafi had a strong interest in geo-political control, and was a firm supporter of OAPEC.

Gaddafi was the major power broker in rising world oil prices during the 1970s energy crisis. In 1998, after Arab leaders failed to support him against UN sanctions, he gave up on pan-Arabism and turned to a Pan-African campaign for a United States of Africa. After UN sanctions were imposed in 1993, Gaddafi established closer economic and security relations with the West to remove them.

In the West, Gaddafi is strongly associated with terrorism, accused of supporting armed groups including FARC in Colombia and the IRA in Northern Ireland.

He cooperated with investigations into alleged Libyan acts of state-sponsored terrorism, subsequently taking responsibility for the bombing of a Pan Am plane over the Scottish town of Lockerbie in 1988 paying compensation and ending his nuclear weapons program, which resulted in the lifting of UN sanctions in 2003.

The 1988 bombing of the Pan Am flight over Lockerbie in Scotland is possibly the most well known international incident in which Gaddafi has been involved.

For many years, Gaddafi denied involvement, resulting in UN sanctions and Libya's status as a pariah state. Abdel Basset al-Megrahi, a Libyan intelligence agent, was convicted in 2001 for planting the bomb, and was released by the UK in 2009.

In early February 2011, Gaddafi's government faced major political protests following in the wake of demonstrations in Tunisia, Egypt, and other parts of the Arab world. The protests quickly turned into a civil war. Gaddafi vowed to "die a martyr" if necessary in his fight against rebels and external forces, saying that those rebelling against his government deserved to die.

On March 19, 2011, NATO-led international forces started air and rocket strikes against the Gaddafi regime under a UN Security Council mandate.

On 27 June 2011 the International Criminal Court issued an arrest warrant against Gaddafi for crimes against humanity.

On 20 August, the rebellion against his rule reached Tripoli, with a large uprising taking place.

1998: Six Bulgarian medics arrested in Benghazi on accusations of having infected 400 children with HIV leading to the 8-year-long Libyan HIV trial

2008: Libya and US sign compensation deal for bombings by both sides

2011: After Tunisia and Egypt, Libya too swept by the wave of Arab World revolutions leading to a six-month war between the Benghazi-based rebels and Gaddafi's dictatorship.