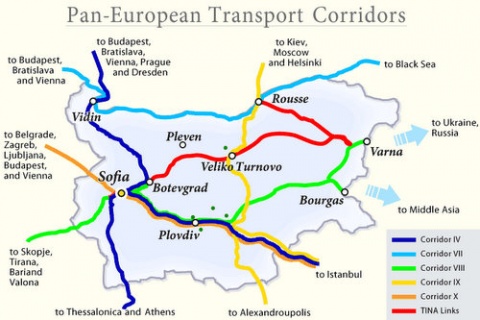 A map of the five Pan-European Transport Corridors going through Bulgarian territory. Map by industrial-zones.com

Bulgaria's Cabinet has unveiled an ambitious new plan for EUR 9 B in infrastructure investments in 2014-2020, which, however, has excluded projects earlier declared to be priorities.

The presentation of the major highway, railway, and river navigation infrastructure projects to be built after 2013 was made Wednesday by Transport Minister Ivaylo Moskovski, Regional Development Minister Lilyana Pavlova, and EU Funds Minister Tomislav Donchev.

According to Donchev, Bulgaria stands a chance of security a total of EUR 8.2 B for the infrastructure projects in question, out of their total estimated cost of EUR 9 B. Reports in the Bulgarian media, however, have pointed out that it is more realistic to expect about half of the total sum, while the remaining funds will likely have to come from loans or public-private partnerships.

The Bulgarian ministers made it clear that the projects in question are part of the projected trans-European transport network – TEN-T.

"Today the European Commission adopted new guidelines for the development of TEN-T, and is thus defining its priorities until 2020, 2030, and 2050," Bulgarian Transport Minister Moskovski pointed out.

He added that the development of the EU transport network is a priority for Bulgaria on all levels because the country is looking to utilize the advantages of its geographic location.

In October 2011, in Brussels, the Bulgarian government and the EC clarified all priority projects in the TEN-T network that go through Bulgarian territory, the Transport Minister announced.

The policy guidelines for TEN-T provide for a basic network, i.e. the most important transport links between the EU member states, and an expansive network – the transport routes that redistribute and feed the traffic from the basic network, he explained.

Thus, the projects from the basic network that are supposed to be completed in Bulgaria in 2014-2020 include:

Expansion of the Danube River navigation waterway worth EUR 371.5 M;

Modernization of the Kalotina-Dragoman-Sofia railway (i.e. between Sofia and the Serbian border), 43 km, worth EUR 133 M;

Modernization of the Sofia railway junction worth EUR 310 M;

Modernization of the Sofia-Mezdra-Medkovets-Vidin railway, 223.1 km, worth EUR 2.677 B;

Modernization of the Sofia-Pernik-Radomir railway, 48.8 km, worth EUR 360 M;

Completion of an intermodal transport terminal at the Bulgarian Danube city of Ruse worth EUR 15 M;

Completion of Lot 3 of the Struma Highway (running from Sofia to Greece) worth EUR 910 M;

Completion of the Kalotina-Sofia Highway (part of the Sofia-Nis Highway leading to Serbia) – EUR 405 M;

Completion of the entire Hemus Highway between Sofia and Varna on the Black Sea coast – EUR 1.250 B;

Completion of the "high-speed road" between Vidin and Botevgrad, i.e. the Hemus Highway, - EUR 330 M;

Completion of the "high-speed road" between Ruse and Veliko Tarnovo (i.e. the Hemus Highway) – EUR 250 M;

Completion of the "high-speed road" between Veliko Tarnovo and the Makaza Pass on the Bulgarian-Greek border – EUR 292 M.

The projects in Bulgaria which are supposed to be completed after 2020 include:

the Rila Highway from Sofia to the mountain resort Borovets;

the "high-speed road" between Ruse and Shumen (i.e. the Hemus Highway);

the "high-speed road" between Varna and Durankulak on the Romanian border, i.e. running along Bulgaria's northern Black Sea coast;

the "high-speed road" from Plovdiv to Rudozem in the Rhodope Mountains.

What is more, EU's TEN-T network is to include:

the highway and railway route – Sofia-Ruse-Bucharest.