A Swing Voter's Notes on a Presidential Debate 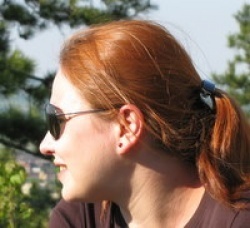 Until Saturday I thought I would protest-vote for the impossible Svetlyo Vitkov, vocalist of Bulgarian rock band Hipodil, a fresh and witty face.

On Saturday bTV persuaded me that I'd better not protest because there are three viable options for Bulgaria's next head of state and the first-round race is already decisive.

I decided to forget my slogan fatigue, skip on the fun part I thought I could afford at the first-round, and actually sit down and choose.

The first one that lost me during Saturday's televised debate was Rosen Plevneliev, candidate of center-right ruling party GERB.

The intro video presenting Plevneliev showed him riding a bike in a virtual reality, the reality he inhabits.

We were told that his children "play football in English".

Good for the children!

How does that connect to ordinary Bulgarians?

Forget the luxury standard of living, why does he stress cycling in this video when cycling in Bulgaria's capital is something between dangerous and impossible.

Apart from Plevneliev's advertorial, throughout the debate he was absent, confused, unpersuasive, speaking in broad terms, attributing accusations to manipulations. He practically used the word "manipulations" in every fourth or fifth sentence.

Plevneliev's neighborliness was complemented by its opposite in the face of vice-presidential candidate Margarita Popova.

She did try to step in for Plevneliev where she saw fit.

I am not sure if she spoke through clenched teeth or the impression of malice came from somewhere else.

What she did was to either attack, somewhat off the mark, or to recite textbook definitions in response.

The second one that lost me was Ivaylo Kalfin, presidential runner of the Bulgarian Socialist Party (BSP).

His introductory video was more moderate.

We saw an elegant apartment, an old-fashioned coffee maker, an insistently ambitious wife and scores of family photos.

In the course of the debate, Kalfin grabbed more attention because he seemed better prepared to attack and better prepared to answer, save for the inadvertent admission that president and prime minister belonging to one party is a bad thing, through which he scored an own goal.

It escapes me, however, why Kalfin, a MEP and skilled politician, has to put up with the voice-over of movie star and theater actor Stefan Danailov.

Does BSP want to advertise expertise or does it want to push charisma to the forefront?

This is the second ticket after Popova-Plevneliev where it is unclear who is wearing the trousers.

The third one that could have lost me but did not was former EU Commissioner and current independent presidential runner Meglena Kuneva.

I believed she first misstepped by showing a feminist card titled "Yes We Can!" to the camera.

The second mistake, to my mind, was to point out that "Bulgaria" is feminine gender.

Sorry, I do not believe feminism does it.

I would not choose a head of state by gender.

To me, in the XXI century it is already irrelevant.

If not irrelevant, it is boring.

Fighting ought to be done without announcements.

The emancipatory card was stacked on Kuneva's tremendously rich bookshelf.

Then we saw a husband who said he was ready to become "first gentleman".

Then we saw what was probably the best part of all presentational videos, Kuneva's close friend Iglika Trifonova, a film director.

Trifonova spoke about Kuneva's vulnerability at the time when she was elected EU Commissioner.

Yes, I remember that Trifonova is a film director.

Kuneva's performance throughout the debate was elegant, powerful, tactful, precise and persuasive.

She did not speak out of turn, did not sling mud, did not hesitate.

She was the only presidential candidate whose vice-presidential partner, Lyubomir Hristov, did not make attempts at outshining.

The viewers were shown who wears the literal and the figurative trousers, all in good proportion.

I have made my informed choice on the basis of what I was and what I heard.

I choose to ignore allegations and accusations and to support what I made sure of myself–  a candidate's well-readedness, swift reactions and self-confidence.

May the best one win, come October 23.