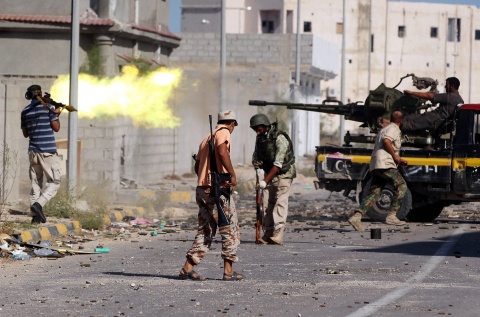 Libyan rebel fighters fire with their weapons, during the battle for the city of Sirte, 16 October 2011. EPA/BGNES

Libyan rebels have started bulldozing down the residence of ousted leader Muammar Gaddafi in Tripoli.

Two bulldozers are at work on the site of the Gaddafi compound in the neighborhood of Bab al Aziziya, guarded by armed men and surrounded by an enthusiastic crowd.

Some of the people gathered are shouting: "We're going to destroy everything that belongs to Gaddafi."

The Bab al Aziziya compound was the target of frequent strikes by NATO and National Transitional Council troups, and by Tripoli's overtaking by the rebels, some 150 dead bodies were found there.

Rebels are in control of a large part of Libyan territory, but strongholds such as Bani Walid and Sirte, Gaddafi's birthplace, have remained in the hands of Gaddafi loyalists.

The location of the ousted Lybian leader is currently not known.