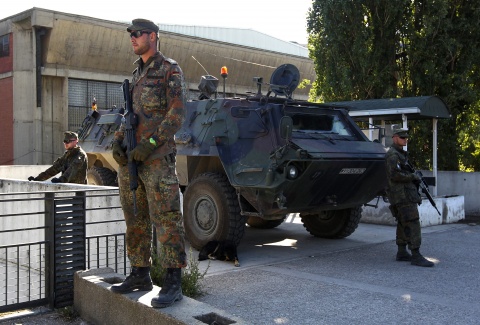 German NATO peacekeepers during a patrol on the main bridge of the ethnically divided town of Mitrovica, Kosovo, 30 September 2011. EPA/BGNES

KFOR and EULEX forces have started an operation to regain control of the Kosovo-Serbian border and destroy barricades set up by discontent local ethnic Serbian residents.

Tensions in Serbian-populated Northern Kosovo have been high since the summer after a trade dispute between Serbia and its breakaway province of Kosovo led to a mutually imposed embargo.

Ethnic Serbs in Northern Kosovo do not recognize its independence and therefore view the border as illegal. They have repeatedly blocked access and taken over the two checkpoints of Brnjak and Jarinje.

"KFOR started this operation by request from EULEX to prevent the illegal use of other entry points and thus to curb smuggling," reads a KFOR statement issued Thursday.

"KFOR reserves its right to destroy the barrickades when the proper moment arrives and will not endlessly tolerate them," adds the statement, urgin citizens not to engage in blocking roads and participating in illegal protests.