Schwarzenegger: I Am Having Fantastic Time with Bruce, Sly in Bulgaria! 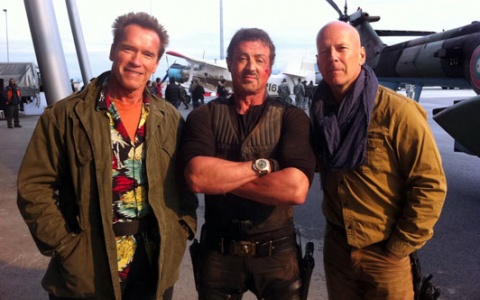 The three action icons look pretty relaxed in the image from the set in Bulgaria. The photo was posted by Arnold Schwarzenegger in Twitter

Arnold Schwarzenegger, who arrived in Bulgaria on Sunday for the shooting of the much anticipated sequel to "The Expendables", has posted a picture of himself with fellow tough guys Sylvester Stallone and Bruce Willis on the set.

"Back in action for The Expendables 2! I'm having a fantastic time on set with Bruce and Sly in Bulgaria," Schwarzenegger tweeted.

The '80s action icons look pretty relaxed in the image from the set in Bulgaria. Schwarzenegger is dressed in a Hawaiian shirt, while Stallone stands with his arms crossed and what looks like weapons on the legs of his costume. Willis is too stylish for an action hero in a scarf and beige shirt. In the background, planes and some military personnel can be seen.

Both Willis and Schwarzenegger had small cameos in the first film, but their roles will be expanded in the sequel.

Sylvester Stallone, Bruce Willis, Jason Statham, Chuck Norris, Arnold Schwarzenegger, Dolph Lundgren and Jean-Claude Van Damme are among the cult action heroes expected to star in the movie that is to be directed by Simon West.

The movie is set for release in August 2012.