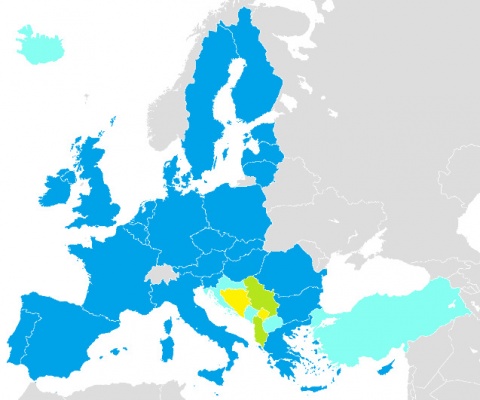 The European Commission has issued recommendations for going ahead with the EU enlargement process by opening accession negotiations with Montenegro, and granting EU candidate status to Serbia.

In a set of annual reports released Wednesday, October 12, the Commission reported on the progress towards EU accession made by the Western Balkans, Turkey, and Iceland over the past year.

"Today's recommendations for Montenegro and Serbia show that the enlargement process is stimulating reforms on the ground and helping to create a more stable and prosperous Europe,” declared Enlargement Commissioner Stefan Fule, presenting the annual Enlargement Package in Brussels.

“The transformational power of the enlargement process sends a powerful message of hope at this challenging time, both for European Union Member States and for the enlargement countries," he added.

In its statement, the Commission points out that in a year that has seen the closure of accession negotiations with Croatia, there has been further progress elsewhere in the Western Balkans.

“The arrest of the two remaining International Criminal Tribunal for the Former Yugoslavia indictees removed a major stumbling block from Serbia's European path and marked an important step towards reconciliation in the region. A dialogue between Belgrade and Pristina was established and has yielded initial results. This needs to be pursued constructively. Montenegro has strengthened its reform efforts based on the priorities set out by the European Union. The European Commission also confirmed its earlier recommendation to open accession negotiations with the former Yugoslav Republic of Macedonia. Visa-free travel to the Schengen area was granted to the citizens of two more Western Balkan countries in December 2010, Albania and Bosnia and Herzegovina,“ reads the EC statement.

At the same time, however, the EU executive body emphasized that good governance, the rule of law, administrative capacity, unemployment and economic reform remain major challenges in the region of the Western Balkans. Further problem areas include regional cooperation, delayed reforms in key spheres, worsening freedoms of media expression, as well as differences over the status of the Republic of Kosovo.

According to EC's “Key findings on the opinion on Serbia,” the Commission concluded to recommend for Serbia to become a candidate country for European Union membership and to recommend that the country will be ready to start accession negotiations as soon as further good progress is made in one key area.

Serbia is found to have “made significant further progress in meeting the political criteria“ for EU accession talks. Serbia is commended for having brought to a fully satisfactory level its cooperation with ICTY, with the arrest and handovers of the last two remaining ICTY indictees, Ratko Mladic and Goran Hadzic. In total, Serbia has delivered on all 46 ICTY requests for handing over indictees.

At the same time, the EC stresses that Serbia will also need to achieve further significant progress in improving relations with Kosovo and implementing pragmatic and sustainable solutions that will facilitate the lives of the people.

The EC report also points out that Bulgaria's western neighbor has taken important steps towards establishing a functioning market economy but still has a number of structural weaknesses, in addition to challenges in implementing EU legislation.

Serbia's neighbor Montenegro is now one step closer to membership as the EC has recommended the start of accession talks.

Montenegro is said to have made “good progress,” in particular in addressing the identified key priorities, achieving overall satisfactory results and is now ready to open accession negotiations. Reforms need to continue, in particular in view of consolidating the track record in combating corruption and organized crime and ensuring full implementation of the anti-discrimination legislation, the EC stressed.