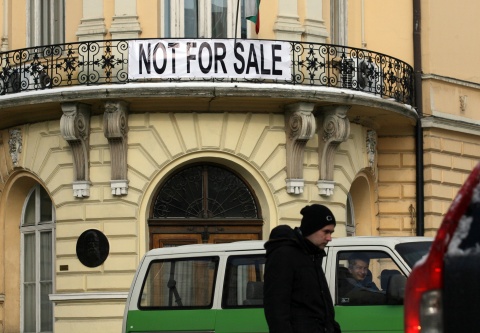 The BAS building in downtown Sofia, right next to the Bulgarian Parliament. The "Not for Sale" sign last winter was in protest against budget cuts.Photo by BGNES

The Bulgarian Academy of Sciences, BAS, marks Wednesday its 142nd anniversary with an official ceremony.

BAS was first founded as a Bulgarian Literary Society, BLS, by a General Assembly, which met on October 12, 1869 in Romania's Braila since Bulgaria was then under Ottoman rule. The Society's first Statutes were accepted during the Assembly and its first leadership was elected through a secret vote. The leadership was represented by a Board of Trustees and acting members.

Nikolay Tsenov became the first president of the Society.

In 1878, shortly after Bulgaria's liberation from Ottoman rule, the General Assembly voted to move the seat of the Society from Braila to Sofia, and on March 1, 1893, BLS moved into its own building, right next to where the Bulgarian Parliament is seated.

The Speaker of the Bulgarian Parliament, Tsetska Tsacheva, will participate in the Wednesday ceremony.