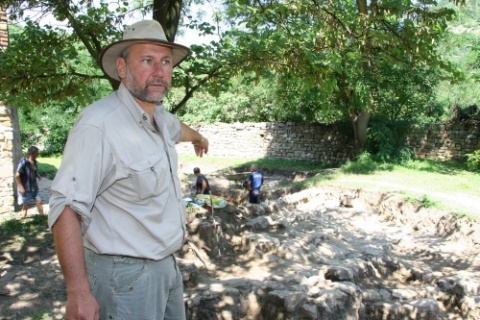 Nikolay Ovcharov, a Bulgarian archaeologist and thracologist, was born in 1957 in Veliko Tarnovo, the son of archaeologist Prof. Dimitar Ovcharov. He graduated with a degree in history from Sofia University in 1976 and specialized in thracology at the Bulgarian Academy of Sciences.

Prof. Ovcharov teaches history at the New Bulgarian University in Sofia and the Slavic University in Moscow. He has published 18 books and more than 250 articles.

Nikolay Ovcharov earned widespread popularity with his discoveries at the unique Ancient Thracian city of Perperikon in the Eastern Rhodopes. It is thought that the famous sanctuary and oracular shrine dedicated to Dionysus of the Bessi tribe was situated there. Later he discovered an ancient Thracian surface tomb in the village of Tatul, containing a sanctuary linked with the cult of Orpheus.

Ovcharov is also publicly known as the “Bulgarian Indiana Jones” in reference to the popular character played by actor Harrison Ford.

It is already October, and you are still doing excavations. What is your current project?

We are working on excavating the medieval fortress of Urvich, which is located 10 km southeast of Sofia. This is one of the most interesting archaelogical sites from the Second Bulgarian Empire, 13th-14th century.

We have a lot of historical accounts about this fortress. Even Father Paisiy Hilendarski wrote about the fortress of Urvich in the first modern Bulgarian history book. Many legends and tales about Tsar Ivan Shishman and his dramatic resistance against the Ottoman Turkish invaders in the late 14th century can be traced to this region between Sofia and the town of Samokov.

The fortress of Urvich was excavated 30 years ago by my father, Prof. Dimitar Ovcharov, and by me, then as a student. Back then we found lots of interesting spots from the fortifications as well as the St. Iliya (i.e. “St. Elijah”) Church, which, by the way, is exactly what we are working on right now.

Unfortunately, there had been no money for continuing the excavations there for a long time but now we put together a project proposal and won funding from the culture program of Sofia Municipality. We are doing the excavations in the month of October with 20 students, with myself and Ass. Prof. Boni Petrunova from the National Archaeological Institute and Museum being in charge of the digs. We hope for lots of interesting finds that we will be pleased to present to the public once we are done.

Have you come across anything interesting already?

We are now clearing piles of rocks. These types of fortresses are very hard to excavate but it is our ambition to uncover the St. Iliya Church. We expect a visit by Sofia Mayor Yordanka Fandakova in order to come up with a project for its restoration.

We believe that the Urvich fortress can become very important for the development of cultural tourism in the region of Sofia. Actually, our excavations are part of a greater project that aims at developing cultural and historical tourism in the entire section along the route between Sofia and Samokov.

Going about it gradually, we can turn this into a very interesting tourist destination the way we did it in the Eastern Rhodope Mountains with the sites of Perperikon and Tatul.

Which discovery of the current year are you most proud of?

Frankly, I am already very tired after five months of excavations already this year but I have made commitments and need to live up to them. This past summer archaeological season was very good.

As early as June, during the excavations of the necropolis at the St. Peter and St. Paul Monastery in Veliko Tarnovo (capital of the Second Bulgarian Empire – editor’s note), we came across wonderful murals from the 15th century, which have been restore, and are now on display at the Golden Hall of the Veliko Tarnovo Museum, together with the marvelous jewelry that also found at the necropolis.

After Veliko Tarnovo, I did digs at the ancient city of Perperikon in the Rhodope Mountains for three months. There were so many things there that I have no idea where to start from. We discovered items from all time periods of Perperikon’s 7000-year history.

But I have to single out the most impressive things – one of them was certainly the ancient temple that we uncovered, which is connected with the altar hall, with a clay altar in the middle.

A crucial find from the medieval period were the seals of the archbishops of Archidos, which is how the Eastern Rhodope Mountains were known back them. Also, from the 14th century, we found another very interesting find, absolutely unique in archaeology – the earliest Ottoman turbe, i.e. a tomb or a mausoleum – of the Ottoman military leader who conquered Perperikon.

The ancient and medieval city of Perperikon with its 7000 years of history is starting to attract international tourists and attention. How should it be advertised as a destination? Maybe as the sanctuary of ancient god Dionysus?

When it comes to advertising in cultural tourism, we need to place emphasis somewhere because, as I have said many times, if things are rather clear for the Bulgarian public – because Bulgarians do know their history, after all – this is not exactly the case with foreign visitors because of their different backgrounds. That is why we need strong, clear messages that can make sense in Australia, for example.

Yet, focusing on some strong points is an advertising approach but this doesn’t mean that we should neglect the overall history of these sites, because each historical period there is very rich and highly exciting.

What has been the gist of your excavations at one of Bulgaria’s medieval capitals, Veliko Tarnovo?

We have been following up with our archaeological research at Veliko Tarnovo for four years now. We are focusing on the wealthiest monastery of the capital of the Second Bulgarian Empire, the St. Peter and St. Paul Monastery. The church of the monastery was set up with the personal sponsorship of Tsar Kaloyan (r. 1197-1207 AD).

What we’ve been working on with my colleague Hitko Vachev from the Regional History Museum in Veliko Tarnovo is uncovering of the yard of the monastery. There we found a second church, previously unknown, which is called St. Ivan Rilski. Up until the 15th century, it kept the relics of St. Ivan Rilski, the greatest Bulgarian saint.

But our most pleasant surprise there came from the uncovering of this marvelous necropolis where the richest and most influential Bulgarian aristocrats were buried in the 13th-14th century. Later, in the 15th-18th century, the richest residents of Veliko Tarnovo were buried there as well.

Because precisely during the period from the 15th till the 18th century, the St. Peter and St. Paul Church – whose wonderful murals have been preserved – was the center of the Veliko Tarnovo Bishopric, the largest bishopric in the Balkans.

We have had lots of historical data about this place. For example, that in 1393 AD, Patriach Evtimiy of Tarnovo served there for one year after Veliko Tarnovo was conquered by the Ottoman Turks. These are extremely important data that have been supported 100% by our finds at the necropolis of the monastery.

What archaeological projects do you plan to work on in the future?

Every year I try to downsize my on-field work because I am 54 already but what happens is usually the opposite – more and more new things are coming up.

We are going through a very strong period for Bulgarian archaeology. You know, the efforts of my great colleague and friend Georgi Kitov, who unfortunately passed away too young, my modest efforts, the efforts of many other archaeologists have given it a boost in the recent years.

We live in such a dynamic time that a person cannot afford to have much time off. It is another matter that archaeological work has its limits. I have people approaching me all the time with requests to check out that mound here or that fortress there but it is impossible for a person to be everywhere.

What is the most important thing that the international audience should know about archaeology in Bulgaria and the Bulgarian cultural heritage?

It is a whole other story, however, that up until very recently, we focused solely on their academic exploration. We used to pay very little attention to the benefits that these archaeological monuments can have for the development of cultural and historical tourism.

This is the new aspect of what’s been going on in Bulgaria’s archaeology recently. And the interest towards cultural tourism – and, respectively, the archaeological heritage – has started to grow tremendously.

So we are already talking not just about the discovery and scientific study of archaeological monuments but also about their importance for such a major economic sector as tourism.

What’s you forecast for the development of cultural tourism in Bulgaria? There seems to be interest on part of international visitors but Bulgaria appears to be failing to promote itself as the country with the sanctuary of Orpheus, for example?

The development of cultural tourism is a slow process, it can’t happen overnight. Just ten years ago there was no talk of cultural tourism whatsoever in Bulgaria. Now there has been increased interest, by four consecutive governments, I’d like to stress that, and the heavy state apparatus is starting to roll.

I will point out to Perperikon as an example in hand – from a totally God-forsaken place it is now turning into a prime destination. It already has wonderful road infrastructure. We are now working on the second part of the project – the creation of internal infrastructure, alleys, paths, restoration and conservation efforts.

A couple of months ago, Perperikon won EU funding worth BGN 4 M for its infrastructure. These efforts will continue, and we are relying on continued support from the Bulgarian state because only EU funded projects won’t do it.

I am optimistic about the development of cultural tourism in Bulgaria; the only question is if this development is progressing as quickly as we would wish.

This is indeed a colossal disaster even though, to be fair, in a country such as Bulgaria with so many archaeological monuments this problem can hardly ever be fully eradicated.

But there is some good news. All of my colleagues and myself note a decline in treasure hunting activities. The situation is not as bad as it was in the 1990s. We need to find out what has led to this decline. Could it be an improvement of the economic situation in Bulgaria? Because treasure hunting has such aspects – it is only normal to see people rob archaeological monuments in a poor country. Or is it because after the raging digs in the 1990s the finds in the surface lawyers are largely gone already?

Whatever the cause, we are seeing a certain decline in treasure hunting. The respective legislation was repaired several times. Perhaps this helped a little even though, technically, we continue to have no treasure hunters in jail.

I don’t think that treasure hunting is the most pressing problem right now, which of course doesn’t mean that we should stop fighting this plague.

Actually, that goes back to my years as a university student when my classmates noted I had a resemblance to Harrison Ford. After that, more recently, in the past 10 years, the journalists developed this image of the Bulgarian Indiana Jones.

But I don’t shy away from it because I really like that movie and the role of Indiana Jones and I think this film and the character did a lot to promote archaeology globally.