1st Bulgarian Electric Cars to Be Made in Lovech in 2012 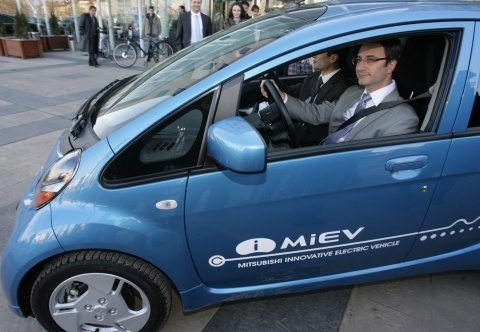 Pictured: Bulgarian Minister of Economy, Energy, and Tourism Traicho Traikov test-driving a Mitsubishi electric vehicle in the spring of 2011. Photo by BGNES

The Litex Motors plant in the northern city of Lovech will have all the needed base and technology to start manufacturing the first series of Bulgarian electric cars in the spring.

The announcement was made by Bulgaria's Economy and Energy Minister, Traicho Traikov, who spoke Tuesday during a conference in Sofia, titled "Electric Vehicles as a Factor for Sustainable Urban Development."

Several electric cars made abroad can already be seen on the streets in the Bulgarian capital Sofia while the Electromobil Industrial Cluster informs they can transform a regular vehicle into an electric one for the fee of BGN 8 000. Earlier plans included manufacturing of electric cars in the city of Stara Zagora as well.

"The European Union adopted a strategy for developing vehicles that do not pollute the environment and Bulgaria reiterated its desire to participate in this process. The sector guarantees high added value and competitiveness, cleaner urban environment and higher quality of live," Traikov says.

The Minister explained the State is to secure road infrastructure to the Lovech plant since it is a class A investment while a work group of experts from different ministries is discussing a package of incentives for the electric car industry and their use by consumers such as exemptions from the Value Added Tax (VAT) for the purchase of electric cars, elimination of registration fees, traffic and parking privileges.

Traikov further said there is a project in place for building charging stations for electric cars in Sofia, Plovdiv and Varna.