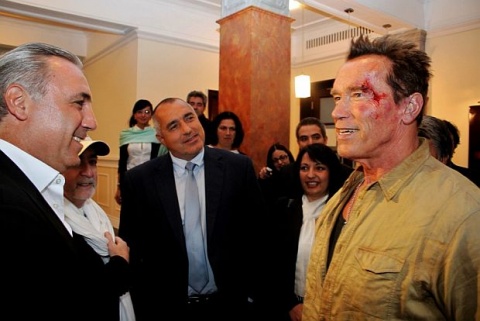 Another Hollywood mega-star is in Bulgaria after Bruce Willis' arrival late Monday evening.

The news was reported by the Bulgarian TV channel bTV.

Willis is joining Arnold Schwarzenegger, Sylvester Stallone, Chuck Norris and Jason Statham, who have already arrived in Sofia for the shooting of the hit action movie "The Expendables 2" at the Nu Boyana Film Studios.

While all others landed in the capital, Bruce Willis has decided to avoid the noise, the cameras and the media and chose the airport of the second largest city of Plovdiv.

bTV further reports that despite the inclement weather and downpours, works continue full speed to finish the bridge that leads to the Devetaki cavern, which is going to be used for the shots.  It is not a bogus one, but real infrastructure that would be used long after the super-production is finished.

Most of the residents of the nearby village of Devetaki already know that Hollywood is coming to them and are anticipating the meeting with some of the world most famous movie starts. Some are even hoping to be able to greet them in their houses as guests.

It was also reported that the team of "The Expendables 2" gathered in Sofia Monday evening to celebrate the birthday of Avi Lerner, producer and Nu Image/Millennium Films CEO. Lerner is turning 64 on October 13, but decided to celebrate several days earlier in order to have Schwarzenegger at the party since the latter is beginning to shot scenes around the country on Tuesday.